Since I am blessed to be a Rocky Point “full timer”, I rarely think about crossing the border any more. For me at least, gone are the days of racing to Paradise after work on Friday, hopefully leaving work a bit early, playing hard all day Saturday, while somewhere in the back of mind the dilemma is tumbling around – when is the best time to leave Rocky Point in order to maximize the fun and minimize the pain of going home?

You have probably tried leaving after breakfast on Sunday (just one more chile relleno breakfast from Xochitl’s in Cholla Bay before leaving), leaving at noon (after the breakfast buffet at Puesta del Sol), leaving “early afternoon” after a too-short day in the sun, leaving late afternoon after squeezing in an entire day in the sun before your 3-6 hour drive. We full-timers try to cross the border in the middle of the week, in order to give the weekenders as much time and space as they need.

Recently I received a blast border blues. I found myself heading north on a lovely Sunday afternoon in late April. It was not a holiday weekend, just a weekend. There were some activities in Rocky Point to which people would have gravitated, the weather was gorgeous, and it was raining in both Phoenix and Tucson, and snowing in Flagstaff – of course people wanted to be in Paradise! I ate a leisurely breakfast, made sure my house was in order, packed the car for a trip to Kingman, usually about 6 hours, and left Rocky Point at 1:40 p.m. I noticed that there was a good bit of traffic headed north, most of whom passed me as if I were tied to a post, even though I usually drive a few, okay sometimes more than a few, miles an hour over the speed limit. But never mind that…I stopped for tacos, then I bought gas in Sonoita – it’s less expensive there, you know – and started up the hill to that last straight stretch before reaching the border. There was a traffic jam right at junction where the big Pemex with the Circle K is located – the problem was the gringos headed to the USA sorting themselves into 2 lanes of traffic waiting to cross the border. WHAT??? Honest to goodness, I sorted myself into one of the lanes at 3:00 p.m., and I handed my passport to the CBP agent at 6:04 p.m. Three hours 4 minutes to cross the border, and I still had 5 hours to drive! And it wasn’t even a busy weekend!

While in line, I had time to reminisce about how I used to do that – sit in that line of cars – often, because I loved my trips to Rocky Point so much, that nearly any price was acceptable for a weekend in Paradise. I remembered three different times seeing cars catch fire in the line, and people having difficulty making room for the bomberos. I also remembered people getting out of their cars and walking alongside them, shopping or chatting. Since I sit in that line with my windows down, I have heard more than one argument and many children crying – waiting in line brings out the worst in everyone. Some things are exactly the same fifteen years later.

There are solutions to the border blues. Leave as early as possible on Sunday morning – the earlier you reach the border the shorter the line will be. Or try leaving late, as in really early Monday morning; if you are at the border when it opens at 6 a.m., you can be at work by 9 a.m. in many cities in Arizona. If you think you might be caught in a line at the border, a bit of planning will make an easier wait – a cooler with drinking water, damp washcloths, and snacks will help, as will something for the youngsters to do. Be sure your car is in good condition before making the trip to Rocky Point – hours of idling in a line at the border in hot weather will bring out the worst in your car’s condition. Turn off the air conditioning and roll down the windows to keep your car from overheating – yes, it’s hot, but your car is much less likely to catch fire. You can check the border wait times before you leave on the US Customs and Border Patrol website at https://apps.cbp.gov/bwt. Have a safe trip home, and come back soon!

Country French Meets The Sea of Cortez in Cholla Bay! 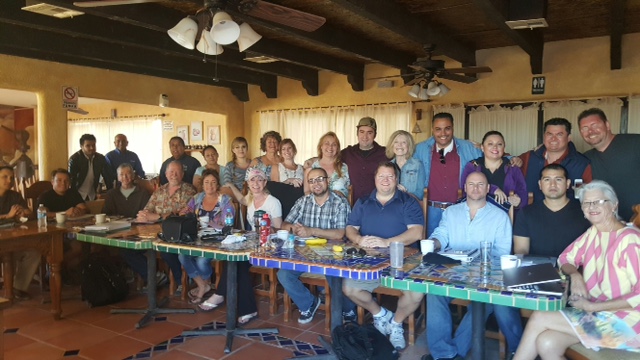 The Mystery of Capital Gains Taxes in The Real Estate Transaction