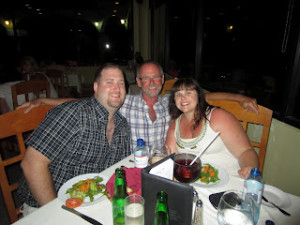 To celebrate my finishing my Master’s degree last week my other half and I went to Puerto Peñasco, Mexico for a long weekend of beach time, relaxation and a little family time. My dad and his girlfriend also happened to be traveling the same weekend, so we all got to spend a few days of quality time together, and of course some great meals along the way! Puerto Peñasco, also known in the U.S. is Rocky Point. It is about a 3 hour drive from Phoenix and for us in Sierra Vista it takes about 5-6 hours depending on traffic, the border wait and road conditions. We hadn’t been down to Rocky Point in about 5 years, after we got married, moved, started graduate school and all that other fun stuff sometimes a 12 hour drive for a weekend trip seemed too much, but we did it this weekend and it was really worth it and made us sad we had waited so long to get back there. The condos we stay in are at the end of Sandy Beach somewhat close to the harbor, but we are right on the water.

Before I get too far into this post and people get skeptical about our travels to Mexico, I know that a lot of people are afraid to travel south of the border right now because of the cartel violence and what not. However, my family has been traveling there for decades and has not once had any problems. Now granted I speak Spanish so I have a little bit of an easier time getting around down there, but almost everyone speaks some English and there are so many Americans who have re-located there that many of the activities are geared towards helping us feel welcome there. You do need a passport to get back into the U.S. so you would need one before heading down there, but I recommend heading down to Rocky Point for a less expensive and more relaxed experience than we have had in places like San Diego or other coastal cities in the U.S.

There are some standby restaurants when we go down and our first stop was the first morning we were there. A restaurant called La Curva (the curve) is by far the most consistent and tasty breakfast spots in this little beach town. Since I am still getting used to photographing everything and my excitement to eat one of my favorite breakfasts leaves you all with a less than perfect representation, but at least you get to see. Everything is served with hot, fresh flour or corn tortillas and two types of salsa. Their red is so flavorful I can’t even describe it and making a little burrito out of the ham, eggs, beans and salsa is the best. The hubbs ordered machaca (a shredded, stewed beef with peppers, tomatoes and onions that is then scrambled with the eggs) and I forgot to capture it on film. A task for our next trip. La Curva also serves lunch and dinner and makes the closest chicken soup to what your grandmother would make you when you are sick that is full of fresh seasonal vegetables that will cure whatever ails you should you fall ill on your beach vacation. Also, the sauce on the potatoes, which they also they put on your free plate of nachos at dinner time, which are killer!

Dinner that night was by far the best meal of the trip.  A new restaurant opened called Pane e Vino that is owned and operated by Rocky Point’s Iron Chef 2012, his first name is Luca. I am always up for trying something new and we were blown away by the quality of food we had during this meal. It is traditional Italian style fare with a hint of seafood and cooking what is fresh and available. The meal begins with fresh rosemary foccacia bread that was so hot I had to wait a few minutes before touching it. For my first course I ordered the Cream of Zucchini soup with croutons that had me wanting to lick the bowl! And my favorite Italian dish of all time potato gnocchi…served with a sage cream sauce and marinara. swoon…I just love gnocchi and when it was as light and fluffy as this stuff I was in heaven. The hubbs had a seafood pasta that came with everything under the sea caught fresh that day which was really fantastic. And my dad had a filet mingon with a Gorgonzola cream sauce that was breathtaking and so tender you didn’t even really need a knife. They brought out some tiramisu and flan that were both pretty tasty as well. The tiramisu was my favorite though, really light and fluffy.

The days were spent laying on the beach, enjoying the water and eating shrimp cocktails from the best mariscos truck “Mariscos Alex”. The shrimp cocktail in Mexico is a lot different than what we know. It is a mixture of cucumbers and tomatoes, sometimes onions chopped up and a mixture of Clamato and lime juice is usually added with some poached shrimp or other seafood. They are so delicious, and in Rocky Point the shrimp are so fresh it is a crime not to eat them as much as possible! I didn’t bring the camera on the beach while we were eating, but next time I will make sure that we get a picture of one of these must have snacks.

Another thing to learn about Rocky Point is that it has the second largest tide drop in the world. At low tide there are hundreds of tide pools in the front of the condos that you can go out and explore. It was a new moon this weekend so the tide was especially low and we got to go out and find some pretty neat stuff! As you can see in the pictures we found a sand dollar, some shells and different types of coral. And of course the sunsets are absolutely gorgeous while you are out exploring what is often underneath the ocean and only available to see a few days out of the year. We were amazed to see what is really under the water when we walked out there and saw all the undersea life. Definitely an activity that you have to try while visiting.

Seafood, seafood, seafood, this is probably my favorite part about Rocky Point aside from the beach time! So many types of fish and of course an abundance of shrimp are available here. There are also local clams, octopus and scallops that can be found at the local fish markets. At our last dinner in Rocky Point we went to Mare Blu, an Italian restaurant with quite a bit of seafood on the menu. I had clams with linguini, hubbykins had flounder with seafood and my dad and Gloria had a ciopinno. Everything was so tasty and not over seasoned. When you have fresh seafood like that, the last thing you should do to it is put too much on it that covers up the flavor.