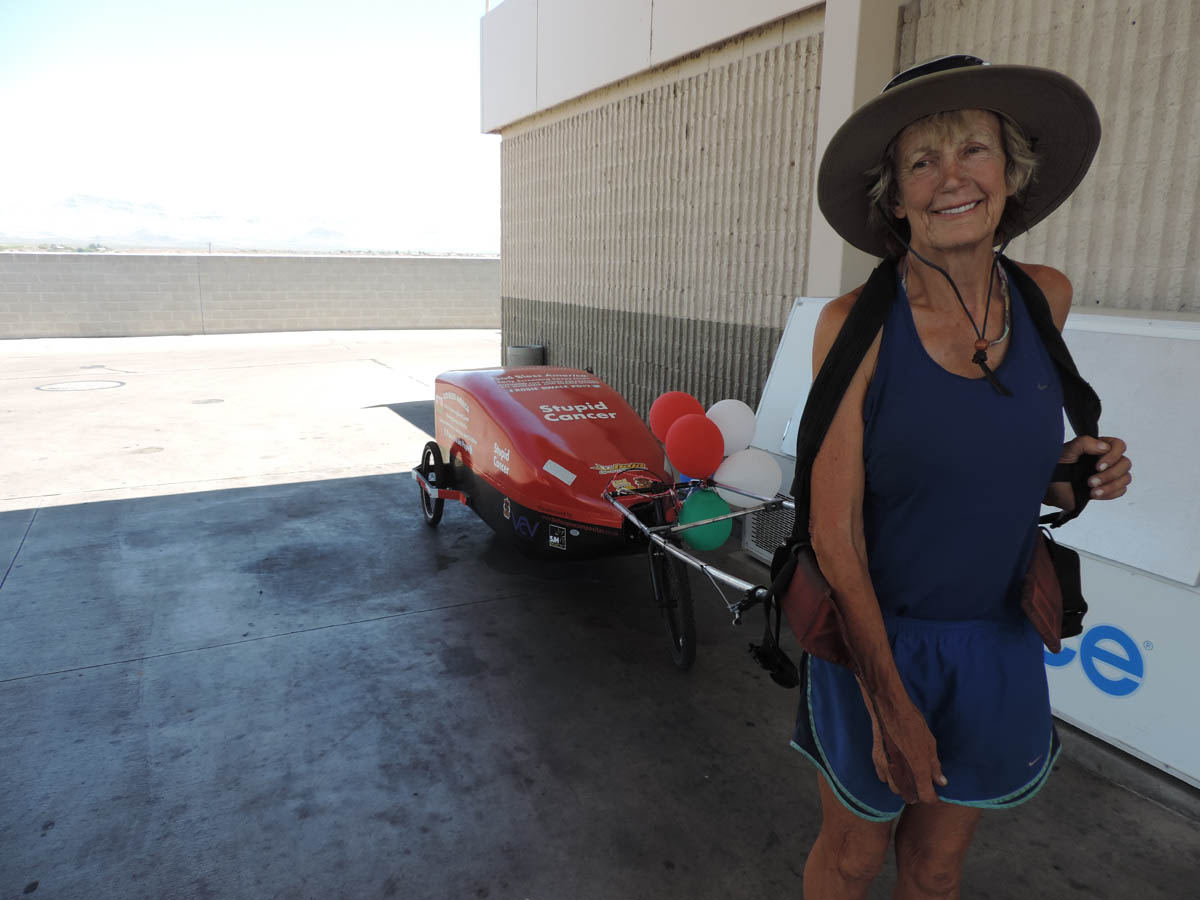 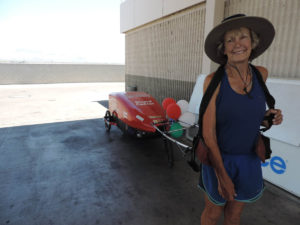 Safford, AZ: It’s not every day I get to meet an explorer, sailor, marathon runner, author, motivational speaker, cancer awareness advocate, philanthropist and cross-country trekker – all rolled into one.

Harnessed to a red three-wheeled cart, what appeared to be an elderly woman was slowly entering the Giant Service Station on West Highway 70, across the street from the Sonic Drive-In. Casually attired in a blue tank top with matching shorts and a wide brimmed hat, the sojourner was obviously seeking shelter from the heat and sun.

Seeing an opportunity to learn more about this vagabond, I pulled in behind her, grabbed my trusty Nikon and note pad, and strolled over to meet what promised to be an unusual character. I would soon learn the woman in the big hat would easily exceed my expectations.

This was no ordinary corner street bum, seeking handouts and donations from sympathetic contributors. To the contrary, the well-tanned wayfarer exhibited an aura of keen intellect and social awareness, expressed in words and terms common to British speaking citizens.

After shedding the harness and sitting down to enjoy a refreshing Gatorade, the woman commenced to give an accounting of her life and adventures and how she happened to be passing through Safford on a sweltering summer day.

Rosie Swale Pope was born in Davos, Switzerland on Oct. 2, 1946, to an Irish father and Swiss mother. At the age of two, her mother died of tuberculosis. Since her father was serving in the British Army, Rosie was sent to live with her grandmother in County Limerick, Ireland.

At age five, her father remarried a French woman and moved the family to Ireland. Four more children would join Rosie. At thirteen, her father passed away and Rosie was consigned to a boarding school for girls in Cork.

In her late teens her first job was a reporter for a regional newspaper, the Surrey Advertiser. However, the lure of adventure was already beckoning and she soon quit the newspaper and hitched-hiked to Delhi, Nepal and Russia.

A few years later Rosie married Colin Swale and lived in London for a short time. Like her, Colin apparently was the exploring type and after the birth of their daughter, Eve, they purchased a 30-foot catamaran and sailed to Italy. Their son, James, was born on board during their time in the Mediterranean area.

Subsequent sailing trips followed. A lengthy world cruise beginning in December 1971 took Rosie, Colin, Eve and infant James across the Atlantic, through the Panama Canal and into the Pacific Ocean, stopping at various islands on their way to Australia, arriving in 1973. A few months later they would be recorded as the first catamaran to round Cape Horn, Chile, South America. In total, they sailed about 30,000 miles.

During the voyage, Rosie worked for hours below deck composing her first book “Rosie Darling,” and also managed to complete a second writing “Children of Cape Horn.” She would later author four more books over a 30 year period.

By 1983, Rosie was divorced from Colin and preparing to cross the Atlantic again – alone. Wishing to be only the fourth woman to solo the Atlantic from England to the United States, she outfitted a small 17 foot boat named Fiesta Girl. Assisting her in the endeavor was her soon-to-be second husband, sailor and photographer Clive Pope.

Rosie departed from Pembroke, Wales on July 13, 1983 and arrived at Staten Island, New York, 4,800 miles and 70 days later. The event wasn’t without mishaps. Nearly being swamped by a passing oil tanker and almost drowning during a Caribbean storm, she continued on, navigating by the stars with the use of a sextant and her Timex wristwatch.

Desiring to expand her exploits into other areas, in July 1984, she decided she wanted to ride a horse the entire length of the nation of Chile, South America. Originally, the 3,000 mile trip was planned to take about four months, but because of various difficulties and delays, Rosie didn’t arrive at the southernmost tip of Chile until September 2, 1985 – 409 days later. Her fourth book “Back to Cape Horn,” is an accounting of her experiences during this adventure.

Why ride when you can walk or run?

On September 25, 1987, Rosie thought it’d be a good idea to walk around the perimeter of Wales, a distance of about 1,375 miles. “Winter Wales,” her fifth published record, reflects the ordeals encountered in this episode.

Then she moves into the “marathon stage” of her life. In 1995, Rosie competed in the London Marathon, completing the run in six hours. Later she would describe it as her most memorable sporting moment.

Later in 1999, she received a bronze medal in the grueling South Africa Ultramarathon, described as being equivalent to running two marathons at once.

In 2000 she competed in the Albania Run; 2001 the 1,360 mile Cuba Run; 2002 the Cardiff Marathon, a competition to aid a local hospital in West Wales, where her husband, Clive, had died from prostate cancer ten weeks earlier.

Perhaps her most ambitious undertaking was her run around the world. Departing her home town of Tenby, Wales on her 57th birthday on October 2, 2003 she would eventually circle the globe, first arriving in Moscow on April 5, 2004. She reached the far eastern side of Russia in September 2005. After waiting out the winter, she crossed Alaska and northwest Canada from April to October 2006. Then another winter hiatus. Nearly a year later, she arrived in New York City on her 61st birthday, October 2, 2007 – four years after leaving home.

Three months later, she left Newfoundland on January 24, 2008 and after runs in Greenland and Iceland, where she slipped on the ice, fracturing several ribs and a hip, Rosie finally made it to Scotland and on down to her home in Wales, arriving in Tenby on August 25, 2008. Distance traveled: approximately 19,900 miles.

Her sixth book “Just a Little Run Around the World: 5 Years, 3 Packs of Wolves and 53 Pairs of Shoes” (2009) details her lengthy and varied experiences in this adventure. Interestingly, while running around the world she took a week break in Canada to compete in the 2006 Chicago Marathon.

In September 2009, she participated in the 236 mile Ireland Run to bring awareness to cancer victims and research.

Finally, in July 2015, Rosie began her 3,371 mile “Walk Across America.” A year later, July 10, 2016 she passed through the Safford/Thatcher, Arizona area on her way to San Francisco. During our conversation, she mentioned how kind the local residents were and the natural beauty of the Gila Valley.

Obviously, Rosie has lived a most interesting life. The recipient of numerous honors and awards, author of six books and several articles and philanthropist to various charities and social causes, her exploits can be found on Facebook, Twitter and Wikipedia, in addition to multiple newspaper and magazine publications. Additionally, she sells various articles – clothing, books, shoes, etc., – on eBay.

Contributing to the quirkiness of the moment was my chance encounter with Rosie. If I hadn’t been driving down the highway on that particular day, at exactly the right time, I probably would have never noticed her as she veered-off the sidewalk into the shade of the gas station canopy.

Fortunately, that didn’t happen and in 106 degree heat I learned a life story that is so amazing as to be almost unbelievable. Rosie Swale Pope is one of those inconspicuous individuals whose contributions to society has gone largely unnoticed by most, but nevertheless, has touched the lives of many people she has come in contact with.

I now include myself in that elite category. 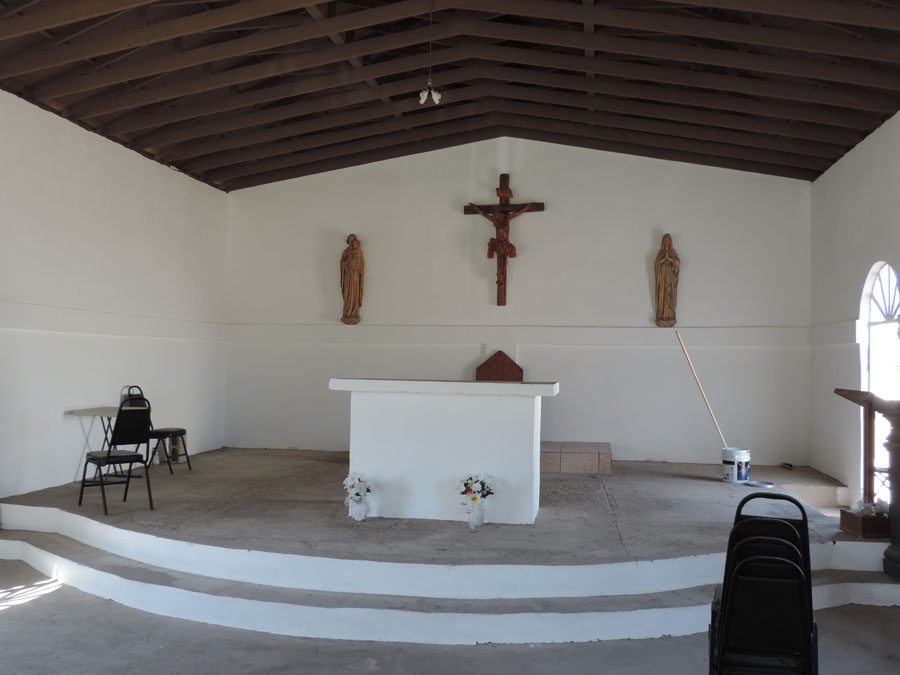 Do You Know The Way to San Jose?