I have been fishing since I was 5 years old. My dad was a fisherman nut. He would go fishing whenever he could. I was his only son so he started me young. I have a lot of memories wading down a creek or sitting on rocks fishing for trout in Montana. I have written stories titled Fish Tails and Beer here in the Rocky Point Times describing my adventures with him. I always think of him when I am out there fishing. He would never go on a boat and I think it was because he couldn’t swim.

I remember fishing with him and he was catching fish right and left when a fellow down river asked him what kind of bait he was using and how was he doing it.

Dad used to start a sentence with “Well you see.” Then he said, “I am using Hellgrammites” (they are an aquatic insect that you get from kicking the rocks over and trapping them). And the guy says, “I am too”. My dad then said, “Are you keeping them warm enough?” “What do you mean?” “Well you see, you need to put them under your lower lip and then take them out and bait your hook and they will be lively and that is what the fish like”.

The fisherman did it and didn’t catch anything. Well it must have been the tobacco my dad was chewing that lured the fish. The bait was real wiggly.

We would catch a bunch of the Hellgrammites and put them in a Band-Aid can with oatmeal and put then inside our shirt because it was cold and we needed to keep them warm. I was standing in water up past my knees and I felt something crawling on my face. Oh no, the can came open and they were loose under my shirt! You think a speedboat has a wake? One would have a hard time rivaling mine.

Since moving here to Rocky Point in 2011, I have been actively seeking the elusive Grouper fish and have been unsuccessful. We charter a boat a few times a month and catch a lot of fish but no Grouper for me. Sea bass, Trigger fish, Corvina, shark, 1 octopus and several pelicans that were trying to get my hooked fish before I could get them out of the water.

We have used 2 different Captains over the years, depending on which one was available. The Captains fish also. We use strips of fish or Calamari for bait. Why is it they seen to catch the biggest fish? Using the same bait and their lines are rigged the same as ours. “Wait a minute here! I’m not putting the bait in my mouth even though I chew tobacco”.

According to the Internet there are ten species of Grouper here in the Peñasco waters of The Sea of Cortez (Gulf of California). Why do they keep changing the names of things like land masses or seas? Do you know the difference between an Ocean and a Sea? The answer is a Sea has more salt content. See by reading my articles you have learned something today. In the 1950’s they used to catch Giant Corvina up to 350 pounds. They would go out in a small rowboat and use a hand line and when they caught a big one they would let it tow them into shore. Just kidding. They since have fished them out and all that is left are the smaller ones. Good fighters though.

There is a public boat launching area on the way to the Malecón, and if you want to go fishing, go there around 7AM and book a trip with a licensed guide. It is safer that way and they know where the fish are. Of course, be ready to go because they might have an opening that day. The usual trip is 5 hours and you only need to take a cooler of snacks, lunch, water or other libations and a motion sickness pill. Don’t want to spend your time “chumming” and feeling sick. I still take one even though I really don’t get sick just to be safe. The boats all have Porta-Potties and a top for shade. They have the equipment and the bait, and they will bait your hook and take the fish off. The Capitan’s all speak enough English so that isn’t a problem.

Fishing has been around since the Cave Man. So Happy Fishing and watch the next issue for another lesson in fishing, or maybe life, or something.

Thanks for taking the time to read my articles. On the Internet Goggle Rob Baylor Rocky Point Times and you can read some of my other articles. 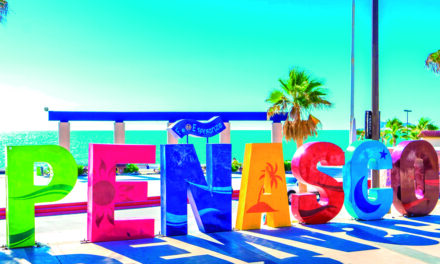 Go where your nose goes