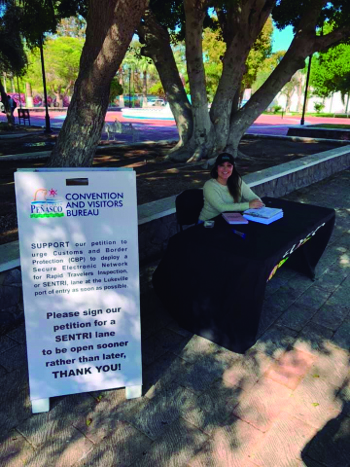 With the support of more than 1,200 businesses and professional firms of Puerto Peñasco, as well as from the American community, a request was sent to the Customs and Border Protection Office asking for the urgent opening of a SENTRI lane at the Lukeville – Sonoyta crossing.

The request which was recently sent to the Customs Office expressed the urgent need to expand a SENTRI lane allowing fast access for frequent travelers in order to avoid the all too common congestion and long wait times when crossing from Mexico into the USA.

This heartfelt request was strengthened by the signing of an agreement with hotel, restaurant, and business sector owners, managers, and employees, as well as both full and part time residents of Puerto Peñasco, the American community and tourists.

The collection of signatures was promoted by agents of the Office of Conventions and Visitors of Puerto Peñasco and was carried out in several locations such as in the border of Sonoyta-Lukeville. Americans returning to Arizona had the opportunity to stop and sign the petition at the border crossing. There were also petitions distributed to various businesses and interest was high on social media sites. There was also a kiosk set up in Rocky Point at Shrimp Park in order to gather signatures. The OCV also arranged signature collection through the digital platform, change.org, which promoted online for people interested in signing the petition.

In a meeting held with business leaders, it was announced that on the Mexican side of the crossing, an access boulevard will be built heading up to the checkpoint, which will be completed by the year 2023, however hoteliers displayed strong interest to acquire Federal funding in order to complete the work more quickly. They stressed the importance of modernization by no later than early 2022 due to the very high traffic use, which continues to grow every year.

It has not been uncommon for tourists returning after a holiday weekend to wait up to 4 hours to cross the border back into the USA. Many visitors have begun extending their trips until Monday in order to lessen the wait, and at this time Mondays have begun to feel the strain of heavy traffic as well. Time will tell if the port will receive a SENTRY lane, but it is clear that improvements need to be made, sooner than later, in order to keep up with the growth of Puerto Peñasco tourism from the North.