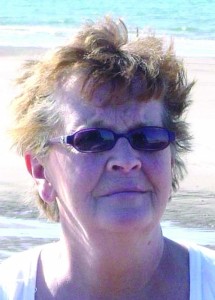 She was preceded in passing by her father Earl C. Dunn and mother Hazel Townsend Dunn, three brothers, Kenny, Donny, and Floyd Dunn and one sister, Devon Mauer. Cheri is survived by three sisters, Lorraine Kilburg, Audrey Scallen, and Elaine. She is also survived by four sons: Shawn Sloan, Troy Sloan, Denton Sloan, and Melvin Walton, and one daughter; Billie Jean Charbonneau, and 13 grandchildren. She is also survived by her husband Doug Walton, who misses her very much.

Cheri was born in Black River Falls Wisconsin where she attended grade school and high school.  At age 20, she married John Sloan.  She had three sons, Shawn David, Troy Earl, and Denton K.  At age 29, she married Doug Walton and had one more son, Melvin Douglas, and a daughter, Billie Jean.  She also raised a grandson Daniel Scott Walton. Although she lived in different parts of the United States , Cheri spent the last fifteen years in North Idaho in the Plummer, Saint Marries area.

Cheri worked as a chef in several restaurants across the United States as she followed Doug on his dreams. All the while being the mother to five children. She never realized her dream of going to chef school; however, never complained about it.  She said she would have plenty of time after the children were raised.

She loved the outdoors and spent many days in the woods with Doug on hunting and fishing trips. She loved to cook in the elk hunting camps in Idaho and could do wonders with a piece of back strap and a pint of homemade apricot brandy.  Cheri could cook up the best fish fry in the world, even though she didn’t like the taste of fish.  She also loved to snorkel in the ocean and was doing just that with some girlfriends when her heart failed.

She loved to travel and constantly bragged about being in every state in the US at one time or another, although she didn’t remember what she saw there.  Wherever she went she made friends, and friends, and more friends.  No one can imagine how many people Cheri met across the continent; however, all surely remember her and will all miss the happy childish love that she had for each of them.

The love that Cheri poured out was like water poured out in the desert.  It was unconditional.  She didn’t have any hidden agendas.  She didn’t care where it flowed. She even poured herself out to those who no one else cared about.

Cheri chased her husband Doug around the world like a puppy. If you told her she was crazy for doing it, she would turn into a Bull Mastiff to protect Doug or the children.  To this day, Doug will question why she stayed with him for the past thirty seven years.

Cheri’s spirit still lives in Puerto Peñasco with all of us who knew her. When you see Doug walking their dog Willie, say, “Hola!” We all love you Doug and we are here for you too!