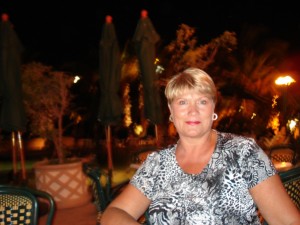 Life has a way of throwing curve balls, a reality I ponder often as I admire the almost daily sunset spectacle here in Peñasco. Why and how I got here is not atypical I suspect for many, who like myself have chosen to make this a home away from home. I was raised a navy brat in post war Britain.

My parents came from Edinburgh in Scotland and Sheffield in England. They met at the British equivalent of a USO concert, my mother the performer, my dad a young naval officer. Love at first sight according to my mother. My dad was little more cautious; regardless, he proposed by enclosing an engagement ring in socks he sent her, which needed darning. Their lives became typical of young newlyweds in post war Britain, with dad away at sea for extended periods, while she held down the fort in various locations, with an ever increasing brood of children.

When he came home for an extended period of shore duty there were three of us who had never experienced a full time dad. We were fortunate that he jumped into the role with gusto and so, unlike many of our friends, we enjoyed a childhood filled with road trips, picnics, camping and the like. Some of this happened in New Zealand, where he was sent in the sixties to oversee a naval ship yard. Three happy years of beach barbeques, camping, clamming and another brother, created a family addicted to travel and the desire for the path less traveled.
When I married, my (sadly late) husband had not stepped foot outside the United Kingdom. My dad, knowing this, gave us a trip to Spain for a wedding present. It was not, in his words, a generous act, rather it was pragmatic, as he knew I had the travel bug and he needed to infect my husband as quickly as possible to ensure a long and happy marriage. It did! Together we explored what we could of the world on beer budgets and when we both graduated from college we packed our bags (two each) and immigrated to Canada to start new lives.
After multiple camping trips in Canada and increasingly lengthy explorations of our neighbors to the south we eventually started our own family, with deep commitment to ensuring that they too would explore the world.
In the meantime my parents retired and decided to join us in Canada. Officially they wanted to be near the grandchildren, unofficially they had not seen much of North America and this was their chance. Finding a great deal on an RV, off they went touring the US and Canada from one end to the other. After a few years they started hearing about a place called Rocky Point. They were told about it by fellow travelers. Apparently it was a great spot with ample camp sites, lovely beaches and good weather so, on one of their many trips south, they headed for Lukeville and eventually Puerto Peñasco. When they finally got home that spring, it was a while before they mentioned their time in Mexico but, when they did, they were so excited by their memories.

Rocky Point had clearly made a big impression. My father could not stop talking about the beaches and my mum the friendly people. Needless to say they came back again (and again).
Sadly my husband of thirty years succumbed to cancer. For the next few years the family and I were in survival mode and then slowly we started to travel again. Then my parents unexpectedly died within months of each other. While sorting family photos we found a photograph of my mother in Rocky Point. She was sitting on a beach with waves lapping over her knees with a huge smile of contentment on her face. On the back of the photo she had written “Rocky Point, great place! I climbed the hill in spite of all the dogs”. In the background clearly visible is Whale Hill. That picture is one of my most treasured.

As a result of that discovery I decided that at some point I would try to make the trip to Rocky Point to see what all the fuss was about, and four years ago I did just that. A dear friend suggested we take a road trip and before I knew it we were heading south. After just a few days here I knew I had to have somewhere to stay for the winter months and fortunately found just the spot. I have owned here since then and spend as much time as I can here, during the cold Canadian winter. My parents traveled to many places, in many parts of the world. Rocky Point was very special to them and has become equally special to me.
I have found the spot where my dad took that photo of my mum. Every time I am here, I go and raise a toast to roads less traveled, family, life and Rocky Point for keeping memories alive.