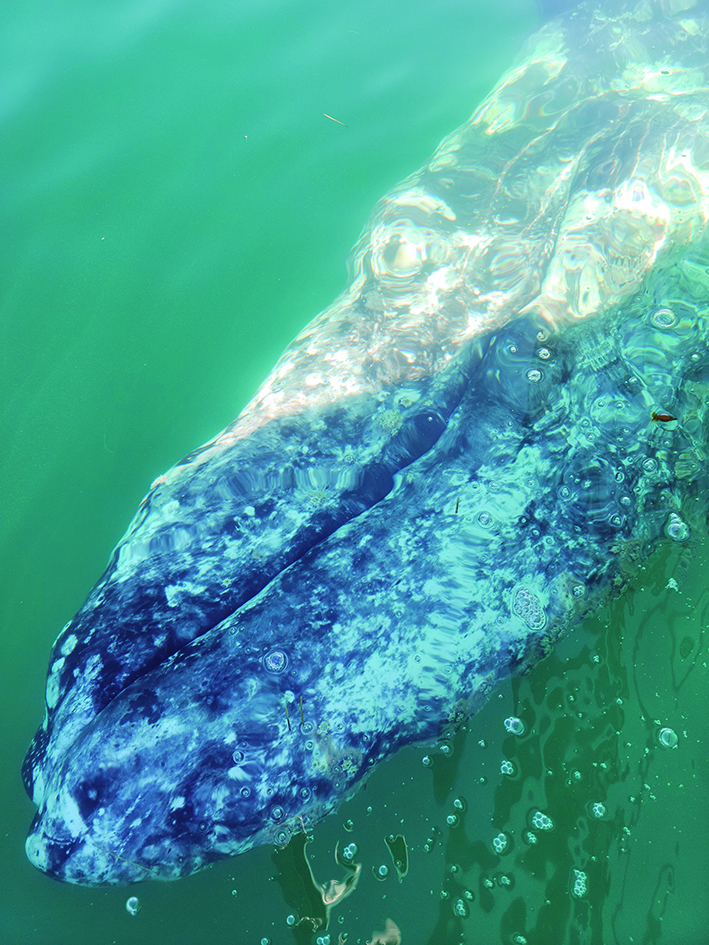 Well, I’ve just arrived back from my trip over to Guerrero Negro and what a fantastic week! A few things have changed this year, but the experience was pretty much the same and just as awesome as last year. This year Tony has added a whale migration lecture, guided salt plant tour, and some tourist shopping, so that was cool. The “hoochie-mama” bar was closed, so that was a bummer, but we made up for it lots of “parking lot parties” – lots of fun for us, but pretty sure the motel patrons didn’t appreciate, especially Room #3! The restaurants do have bars, and some have pool tables, and they were all open, but I was really looking forward to seeing Patti, Eileen and maybe even Keith and Frankie on the pole – there’s always next year!

Yes, Guerrero Negro is still definitely on my yearly-to-do-list though next year I’m going to shoot for mid-March when the babies are bigger and more social. We did have a couple come close to the boat and I did see a super tiny newborn (if you can imagine a super tiny Grey Whale!). Last year we had a lot of calf action, but this year the Grey’s were still making babies so there was lots of lovin’ going on and “Pink Floyd’s” were making appearances – a sight one is not soon to forget. Now is a great time to book your trip for this month or next as there is already more baby action going on even since I left. Contact Tony Ballesteros at www.mysticwhaletours.com  or give him a call at (520) 249-2337 or email him at tonyballesteros2@msn.com.

Back to last year…It’s Saturday night (I think) in Guerrero Nego at the “hoochie-mama” bar and in walks a bunch of Gringos. I don’t think it’s a sight they had seen in a while because we overheard Barbara calling her boss…her boss did come in a little later and didn’t give us the boot, so all was good. Patti and Dan played pool, Mary and Barbara worked the juke box, and Candy and I sat at the bar people watching and checking out the décor like the giant stiletto shaped chair. Hmmmm. There was some line dancing, some pole dancing, and some shenanigans, but I won’t name names as to protect the guilty. The beer was cold, the entertainment was cheap, and a good time was had by all. We stumbled out of the bar, down the street, and back to our motel and were none the worse for wear the next morning. Good times! I did develop a bad case of laringytis sometime between Saturday night and Sunday morning…Hmmmm.

So how did Mario and Alicia wind up in the photos in Guerrero Negro?

I’m going to say that this conversation took place sometime Saturday night, probably at the bar, since our flight back home was the next day – and it didn’t go exactly like this, but it was definitely Mary’s idea…

Mary: I don’t want to go home tomorrow. I want to go out and see more whales. We should stay! Why don’t we stay? Who wants to stay? Lannette, you want to stay? We can catch a flight later in the week.

Long and short of the story…We stayed, but there was only one seat available on any flight back to Peñasco. So how do we (meaning me) get back home? Hmmmm. The first thing that comes to my mind is Mario and Alicia – they love adventure, and they don’t mind driving, so they can drive my truck down, hang out with the whales for a few days, and then we can all drive back. I shoot them a message and see if they want to come down. Of course, they do, but they can’t drive my vehicle since it is registered in the U.S. Crap. Okay, rent a car. Yes, rent a car! Does Rocky Point even still have rental cars? Luckily, Mario knows everything and everyone in town and finds a rental car in no time! We get all the details ironed out and they are to leave the next day after they pick up some items that Mary and I need.

We only packed clothes, medicine and toiletries for 2 days and we only brought enough cash for a couple of days as well…no bank cards or credit cards – actually I think I had 1 credit card that stopped working and Dan was kind enough to pay my $123 bill at the souvenir shop. (Bet he’ll never do that again since it only took me a year to pay him back!) So, the next couple days had us back and forth to each other’s rooms borrowing brushes, conditioner, pesos and other items one of us or the other ran out of. Mary was smart and had her laundry done while I thought I could tough it out and designate one pair of jeans for whale watching trips (they had already been worn for two days) and one semi-clean pair for outings. Next time, I will have my laundry washed. (I did get a couple new t-shirts once Mario and Alicia came with money.)

Monday morning Mario and Alicia hit the road and Tony led Mary and I to some of the best birria I’ve ever had. The night before we had an excellent dinner at San Remedio, where we ate quite a few times this year as well. I mostly feast on lobster when in Guerrero Negro, but did spend a lot of time at Tony’s Tacos ordering shrimp tacos by the 3s. Tony’s serves up some of the best shrimp tacos I’ve ever had – rivaled only by Rocky Point’s own Blue Marlin in the Old Port.

If I remember correctly, I think we expected Mario and Alicia to arrive around 10PM so they would have plenty of time to rest up before we headed out for whale watching the next morning. We usually leave the motel by 7:30AM so that we get out on the water by 9AM. Well, it seems that something happened to Alicia’s map program or phone or both and they ended up taking the long way though they didn’t know it at the time. When she called about 6PM that night and said they were in Ensenada, Tony asked me what they were doing there? I said something happened to her phone or map program and that’s where they ended up. He said they could’ve shaved like 5 or more hours off of the trip if they had come down the newly redone Hwy. 5 out of San Felipe over to Hwy. 1. Well, I couldn’t really tell them at that point in their journey that they had gone way out of their way. I didn’t want to make them feel bad since they couldn’t backtrack and save time, so I just kept quiet and told them to drive safely. They arrived somewhere between 2 and 3AM and were surprisingly energetic and eager to go see the whales the next morning.

We went out a few times with Tony and his new group and we had a blast. Some days it took while for the whales to interact with us, but eventually we did get to see and touch babies as well as the biggin’s and the cannon ball jellyfish were still around, so we got to hold a couple of those. With each new group that came in, Tony let us tag along to dinner and to the salt plant tours so they got to experience all that as well. This year, due to Covid, we weren’t allowed to tour the salt plant, but were still able to see the outside of the operation, the giant salt hill, trucks, barges and overall operation.

After a fun-filled week, we had to head home so we hit the road at 6AM so we could make it home by dark. Mary was flying out that same day and the took one last trip out with the group and, of course, she claimed it was the BEST outing of our ENTIRE trip. Yeah, sure, whatever. I didn’t believe her until I watched her video and while I won’t admit it was the best, because how could it be if I wasn’t there, but it was pretty cool.

Each and every time out is a completely different experience. The comment I heard the most this year was how the actual experience is nothing like they imagined – you just can’t describe it no matter how awesome you make it sound; the real thing is SO much better. I did have a few new experiences this year like the newborn calf, getting to touch the mouth and baleen and my first belly rub ever – that was super awesome. Since whale season goes into April, I’ll write an article next month about this year’s excursion and girl’s trip down to San Ignacio…and my speeding ticket :/ If you have the means to go whale watching with Tony this year, I highly recommend the trip – it is an unforgettable experience. If you can’t make it over to the Baja, be sure to jump on one of our local charters to go out whale watching here in Rocky Point.

2. My shadow on the whale…see the eye and how huge the whales are!

3. Whale checking us out. The water was so calm and clear.

4. These beautiful gentle giants don’t even make a wake when they cruise by the boat.