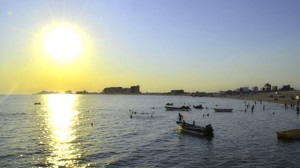 Puerto Peñasco, or Rocky Point, as many of us in the Valley know it, has been luring metro Phoenix residents for decades as a sleepy, economical paradise a mere three-and-half-hour drive away. It has long been a retreat for college spring-breakers and families alike longing for the beach lifestyle without the cost.

Peñasco has an economy built primarily on tourism.

In recent years, it has suffered the impact of the drug violence that has plagued much of Mexico’s border communities, despite little drug activity actually occurring within the Peñasco community.

Peñasco is now poised to grow significantly, and that growth presents unique opportunities for Arizona.

However, to benefit, Arizona needs to step past our adversarial view of Mexico and embrace the beauty of this gem along the Sea of Cortez (or the Gulf of California, as we know it) and the impact it can have on our own economic future.

Work has begun along Peñasco’s Sandy Beach to build a new cruise terminal. Slated to open in 2015, this terminal will bring Peñasco large cruise ships full of tourists eager to spend their hard-earned dollars. With the primary access to Peñasco flowing through the border crossing in Lukeville, there is every reason to believe Arizona has a golden opportunity to benefit from the significant investment that Mexico is making to grow tourism in Sonora.

For too long, Arizona’s public relationship with our southern neighbor has been focused on fighting immigration and drugs and not on developing an atmosphere that builds economic opportunity and growth in both. Perhaps putting energy into developing sustainable economies south of the border can ease the pressure on the border and develop opportunities for mutual benefit.

Cruise ships on Sandy Beach could mean tourists traveling to many of Arizona’s notable landmarks on the way to and from their ship. It is not far-fetched to imagine travelers traveling to the Grand Canyon, Tombstone or San Xavier del Bac Mission en route to their adventure in Mexico’s quiet beach communities.

To seize upon this economic-development opportunity, we need a major sea change in the perceptions that rule our relationship with Mexico. We need investment in our tourism marketing and infrastructure to attract people through Arizona and into Peñasco’s port.

That includes working to make the border crossing more user-friendly and investing in our infrastructure on routes into Mexico to make it more palatable to discerning travelers. We need to work with the federal government, as Texas has long done, to expedite commerce and tourism throughout the border region.

We must realize that the defeat of criminality along the border can only be achieved through the promotion of the basic American principles of liberty and the pursuit of happiness for all people – both north and south of the border.

Importantly, we must realize the rare opportunity that we are getting and dare, as Mexico has, to seize the chance to grow our economy by understanding the multitude of ways we can attract people to our many wonders.

We must realize that a rising tide in a new Peñasco port will lift opportunity on both sides of the border.

Gregg Edgar of Chandler is a long-time communications and media consultant in the Valley who has been traveling and enjoying Puerto Peñasco for 30 years.