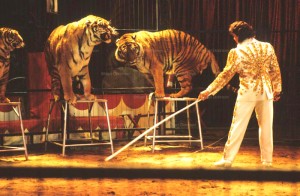 The circus may be able to carry on without the animals, but what will the latter do without a circus?

The Mexican federal government, which has passed legislation banning the use of animals by circuses, estimates there are 2,000 circus animals that will soon be unemployed. The circus owners’ association says there are more like 4,000.

Whatever the count, it remains a challenge finding homes that can provide for them.

Bruno Raffo is an Argentine animal trainer whose scarred and scratched arms tell something about his line of work. Like many circus workers, he no longer has a circus job because many municipal authorities, such as those in the Federal District, have already begun denying permits to circuses with animals.

Instead, Raffo is currently caring for 13 tigers, feeding and exercising them and cleaning their cages. The cost of feed runs to nearly US $200 a day. Add to that the cost of caring for the animals and veterinary services.

Circus owners don’t wish to foot that bill indefinitely, yet the likely destinations for the animals – they include elephants, giraffes, bears, jaguars, zebras, llamas, horses and camels – are zoos that aren’t all that keen.

Many of the animals, such as Raffo’s tigers, are accustomed to living together as a group, and there are concerns about splitting them up. The Chapultepec zoo in Mexico City has a plan to take some of the animals but it is not feasible for it to take such a large number.

So federal officials are looking for other zoos, public and private, research centers and ecotourism parks where the animals might go. One such facility is African Safari near the city of Puebla, where the animals run free and visitors travel in vehicles to view the animals. It has already indicated that it is interested.

The circus owners, meanwhile, many of whom are now out of work themselves, are waiting for answers. If homes are not found, they warn, the animals will have to be put down.

“We’re waiting for an answer from the government to hear what’s going to happen to our animals,” said Armando Cedeño, president of the National Union of Circus Owners and Artists.

While some circuses have closed, others continue to operate, but as of July 8 they cannot do so with animals. That’s when the law, whose principal proponent was the Ecologist Green Party, goes into effect.

Anyone who might fancy keeping an elephant, a giraffe or what have you should contact Alejandro del Mazo of the environmental protection agency, Profepa. He can be reached via Twitter.