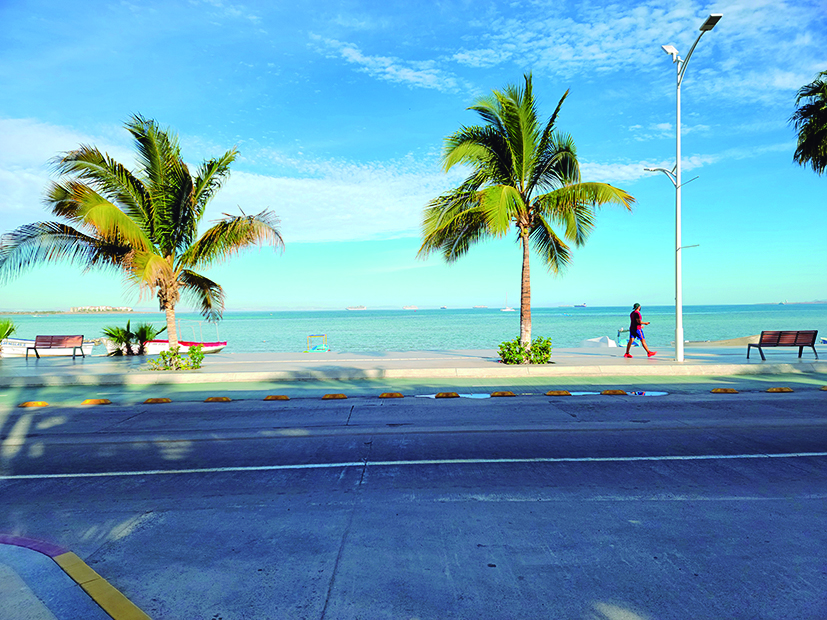 After an uninspiring four-hour drive from Loreto, through arid and nondescript desert, we entered the city of La Paz (Peace), the state capital of Baja California Sur. With a population of almost 300,000 souls, according to the 2020 census, it is truly a cosmopolitan city. Where Loreto offered a ‘quaint’ old world feel, La Paz exudes a vibe that says “this town is happening!”

You can get a good taste of that while driving along the extensive shoreline and Malecon area of broad Bahia La Paz. The shops, the hotels, the restaurants all bustle with activity and people. The locals who go about their business, the tourists and visitors who go about theirs. Full disclosure; I have SCUBA dived, flown to, and stayed in La Paz quite a bit over the years, and have never been disappointed. The city has grown, but then so has Peñasco…right?

Since COVID, the bay has been home to several cruise ships which have been ‘furloughed’ to ride out the pandemic as it runs its course. The ferry that goes from La Paz to Topolobampo on the mainland makes it way past the ships, giving the scale needed to judge their size. These oceangoing behemoths sit placidly at anchor out in the bay, attended to by skeleton crews, awaiting their recall to service. The scene is tranquil, beautiful…and unique. We are far enough south now for that “tropical” feeling to make itself known, and gazing out over the bay and at the coconut palms at the water’s edge gently swaying against the blue sky, as the daily life of this city fairly pulses around you, well…what more could a visitor ask for?

The Malecon is miles long, well-manicured and kept in good shape as both locals and visitors (with and without their canine companions) walk, jog run and exercise along it. There are many beautiful and interesting pieces of statuary and artwork that the city has erected along the entire length, making for a wonderful opportunity to enjoy the fresh sea air, scenery, exercise and learn a bit about this vibrant city. Frankly, you could do a lot worse than taking a leisurely stroll along the edge of the bay, day or night.

Since we knew the Posada de las Flores hotel in Loreto, we decided to stay at the Posada de las Flores in La Paz as well. The hotel is located on the main street facing the bay. Just cross the street, and you’re on the Malecon. Having met the owner of these unique, boutique, hotels in Loreto, we were pleasantly surprised to meet him again, as he lives in La Paz. A true gentleman, Guiseppe personally did all of the custom wood working for both hotels, and his art and attention to detail makes staying at either hotel a very worthwhile experience. Of course, there are many other accommodations available, in town and out, that fit any budget…this just happens to be our favorite!

The amenities and comforts at Posada de las Flores are first rate and the restaurant, ‘Olivias,’ is superb! If you’re a ‘foody,’ make a reservation at Nim and enjoy the classic, cozy ambiance, wine selection and exquisite cuisine. It’s off the main drag, but oh! so worthwhile!

After only a few short days enjoying La Paz, we were once again moving on. A two-hour drive through some scenic mountain roads, going past some wonderfully picturesque little towns like San Bartolo, (which we decided will require further investigation at another time) nestled in the valleys, took us to our next destination.

No trip down this far into Baja would, for me, be complete without a visit to Rancho Leonero. In the mid 1980’s, I and several other ‘adventure’ travelers had the pleasure of SCUBA diving the Cabo Pulmo reef on the East Cape before there was a single building (or even much of a road) there. We stayed at a rustic fishing camp called Rancho Leonero south of Buena Vista and Los Barilles. The owner, a guy named John Ireland (grandson of the actor…if you are old enough to remember him…), was developing Rancho Leonero to be a fishing and diving destination.

Back then, the word “rustic” would have sufficed to describe the accommodations. Thatched roof, stone walled huts with comfortable beds and minimal restroom facilities were the order of the day. The main lodge was where everyone congregated to eat (all meals included since there was nowhere else to get food) drink, tell lies and otherwise socialize. There was a large green Amazon parrot named Montego who would walk the bar pass-thru and sing “I Left My Heart in San Francisco” for a peanut or bit of food. The food was good, served ‘family style,’ and the company, diving, fishing, and camaraderie first rate.

Fast forward forty or so years. We made reservations to stay, as well as to do a little deep-sea fishing so my wife could catch a Rooster fish (she didn’t). What a difference a few decades makes! The place has grown up! While still “rustic,” that word no longer holds the same connotation as it once did. The individual huts still have thatched roofs, but all are ‘en suite’ and have covered patios! All walkways are paved with local stone, the hotel rooms are spacious and well appointed, the grounds are well manicured and accessible, but best of all, the main lodge hasn’t changed a bit! Well, Montego is no longer in residence, but you can enjoy the breathtaking views while sipping a cocktail on the patio or at the pool overlooking the beach and ocean!

Unfortunately, either due to COVID requirements or poor oversight by management, the dinners left a great deal to be desired. While the breakfasts were wonderful and the lunches so-so, the dinners we appallingly prepared and served. By virtue of the fact that you are, for lack of a better term, a “captive” audience this not a good thing! We sure hope that our comments to management result in changes. Really our first disappointment of the trip.

While the resort has ‘matured,’ and is still a sport-fishing mecca, diving is not so much in evidence. You one can still charter a boat to go diving, but fishing is the magnet. Overall, a very pleasant place to unwind and relax and quite a contrast from bustling La Paz.

Moving on, we next headed down around Cabo San Lucas and began our trip up the west coast of Baja. 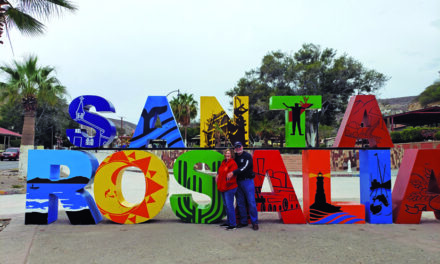 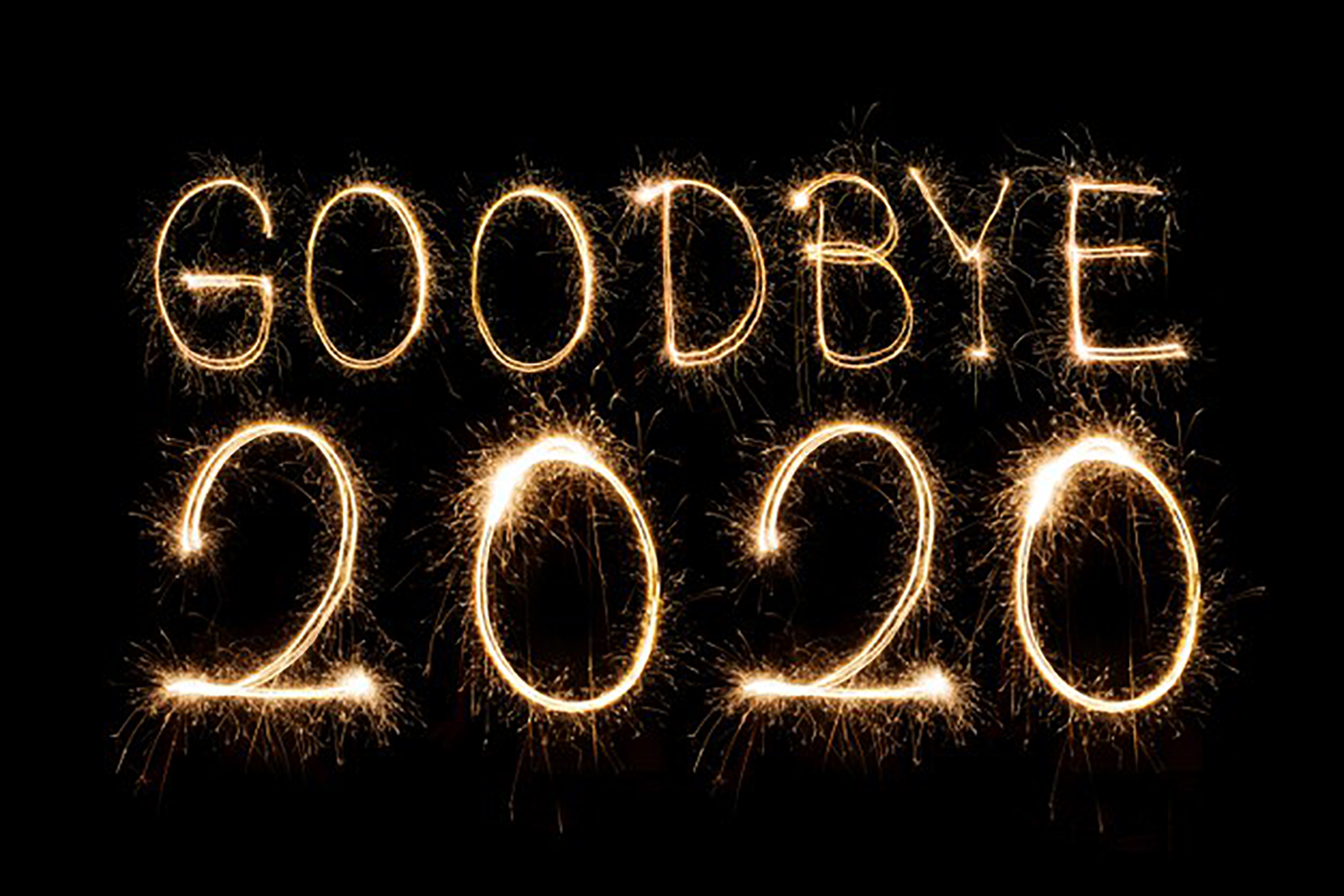