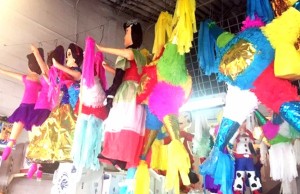 The highlight of many a Mexican festive occasion-a birthday celebration, Christmas party, or posada, is the breaking of the piñata.

For the uninitiated, the piñata is a decorated clay pot or papier-mâché container filled with treats (more about those later) which is strung from a rope and flailed at in turns by party-goers who are blindfolded and armed with a stick. A person at one end of the rope-or sometimes a person at each end-will be able to swing the piñata in an attempt to keep it away from its attacker, and make the game last as long as possible.

When the piñata breaks, the contents are scattered on the ground and a rush is made to collect as much booty as possible.

At most children’s birthday parties and Christmas posadas the order in which the participants get a shot is based on age, from youngest to eldest. This is logical since the bigger the person, the more likely they are to break the piñata, and the idea is to keep it going for a good while.

The duration of a “turn” is as long as it takes to sing the piñata song, which goes like this:

Which loosely translates as:

Because if you lose it, you will lose your way

Now you’ve hit it once,

And your time is up.

More thought and decision-making goes into a simple piñata ritual than you might expect.

First of all, what should go inside the piñata? Christmas piñatas tend to be healthier than birthday piñatas. They usually contain pieces of sugar cane, tangerines, or little oranges called naranjas piñateras, peanuts, a Mexican fruit called tejocote, limas (a sort of cross between an orange and a lime) and a variety of candy: boiled sweets, chocolate coins, and such. Birthday piñatas tend to have more candy and less fruit.

Next, where to stretch the rope on which the piñata will be strung? This often involves at least one person, usually an adult, leaning precariously out of an upstairs window, or hanging-off the side of one of those spiral iron staircases common in Mexico as a way up onto the roof.

Finding the right stick to strike the piñata can be tricky. Years ago, a broom handle used to do nicely, but today most of these are hollow plastic or thin hollow metal tubes, and too light to make any impression on the piñata, especially the more common papier-mâché ones which are quite resistant, as the material is flexible. A baseball bat, on the other hand, is too heavy for the smaller swingers and an unfair advantage to the bigger children or adults. Piñata shops actually sell sticks that are about the right size and weight, which is fine in today’s world of ready-made. If the stick doesn’t break during the ritual, it can be stored ready for the next party.

Once the piñata is all set up, and someone finds an adequate scarf or bandanna to use as a blindfold, the fun is ready to begin (the little children are not blindfolded, by the way).

If the piñata is one of the spherical ones with paper cones stuck on it, a common strategy frequently used by players is to knock-off one of more of the cones without breaking the piñata. There’s a sort of unwritten rule that if you break one of those off, that ends your turn, but you get to keep the cone, which is useful for filling with goodies once the piñata is broken. If the piñata is thematic-Disney characters seem perennially popular-an arm or a leg or any other non-core piece of the piñata could be broken-off and kept for the same purpose.

With clay pot piñatas, one good crack can break them open and the contents would spill on the floor. With the more common and most popular papier-mâché variety, often the piñata will split rather than break, and just a few things fall out, prompting some of the children to rush-in to grab them while the person with the stick may still be in full-swing: if blind-folded, they might not realize the piñata has been split. This calls for a time-out while the stray pieces of fruit or candy are retrieved. If the split or tear in the piñata is big enough, the person in charge of the rope will usually shake it up and down so that more fall out. Then one of the adults will take it upon him or herself to declare the piñata broken, step into the arena, grab the damaged artifact and shake it until all the contents are emptied onto the ground.

This signal is a cue for the scrum, as children rush in armed with their cones and other piñata parts, or at least one of those ubiquitous plastic bags, to fill.

After the adrenaline fest, adults with brooms appear to sweep up the remains of tissue paper, papier-mâché, and the odd broken fruit no one claimed; and some redress is made in benefit of the less aggressive of the participants whose share of the loot doesn’t come anywhere near to what even the least social-minded might consider fair.

More Spanish Phrases That Seem to Make No Sense…