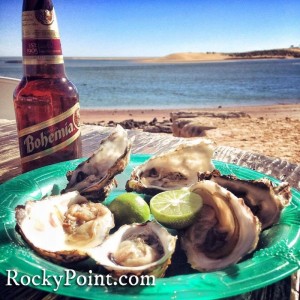 I hate ’em. Oysters. Put ’em on a cracker, put hot sauce on ’em, it won’t help. Have you looked at them? Like something out of Steven King. Some people love them. They tell me Oysters are high in zinc, protein, omega 3…oh, and they’re an aphrodisiac. To who, I wonder, other Oysters?

They also tell me that the best ones, the freshest you can get anywhere are from the oyster farm east of Rocky Point. One weekend I have friends in town who have always wanted to go. Never one to be a party pooper, I jump into the SUV along with everyone else. I’m sure I can keep a straight face and eat three or four of them. They have beer don’t they?

We pull off the highway at a hand written sign that says “ostionera”. Bouncing down the washboard road we squint into the afternoon sun. “That was quick” says my friend as the estuary suddenly spreads out before us. The shallow water flows out to the high dunes by the sea, sparkling with light. A small flock of birds takes off as we pull into the dusty parking area. In the shallows are a dozen square boxes that house the oysters, looking like a miniature condo project.

Estero Morua is one of the unique estuaries that dot the coast along the northern Sea of Cortez. Created where the Rio Sonoyta enters the ocean, the mixing of waters creates a place full of life. Most noticeable are the birds. A major stop during migration, the estuary is also the nesting site for a threatened species of Tern. Piles of discarded shells have been found that date back hundreds of years. The Hohokan were here, fishing and taking shells back to what is now Arizona to trade. These days Arizonans still fish at the mouth of the estuary, and kayak in the shallow waters taking photos.

An old man with weathered skin and a Dodgers baseball cap greets us at the palm roofed ‘restaurant’. We have the place to our selves, and take up a picnic table center-pieced with bottles of hot sauce, limes and salt. “Now you just want to kind of slide them off their shell into your mouth, and not really chew them, just sort of…” “Larry” I say, “I got it, I know how to eat them.” For me, eating them means a dash of hot sauce, a squeeze of lime, and a good amount of feigned non-chalance.

I switch to straight beer drinking sooner than the others, but it wasn’t bad. These oysters had a very mild flavor. I’m sure that’s why they have such a good reputation with seafood lovers. Still, I don’t love ’em. And three beers later, I’m still waiting for the aphrodisiac effect to kick in.

“Man, that was great, we should come again tomorrow” says my friend. The group enthusiastically agrees. And who can blame them. As the sun starts to set, the pink at the edge of the horizon mirrors in the water. You hear the faint flutter of wings as a flock of birds circle low, almost ready to settle for the night. “I want to come back too” I say. “You?” says Larry, “Oysters are good, huh?” “No. I’m going to leave you guys here while I kayak.”

Head East out of town on Fremont Blvd. Within a mile or so you will see signs on the right announcing ‘Ostionera’ (Oyster Farm).