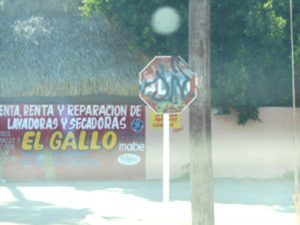 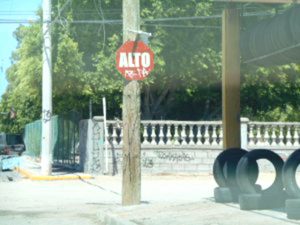 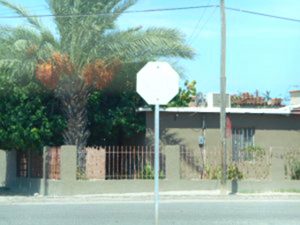 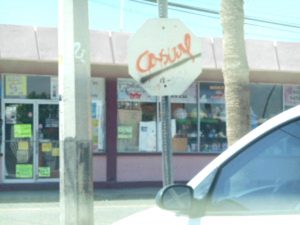 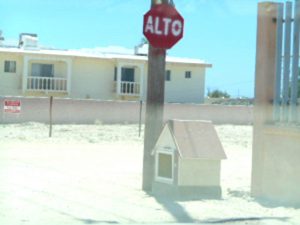 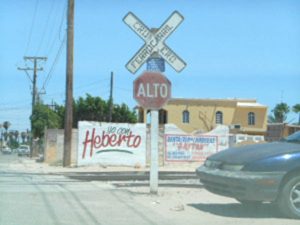 Stop signs of Rocky Point. What a fun project to take photos of stops signs today while I was out doing errands.

I thought of this idea a few months ago and decided, since I had errands and appointments today, I would get a few shots from my car while out on the streets. Some of them you may recognize, some you cannot even see until you get right on top of them since they are hidden behind a tree or a parked car. Some are placed on telephone poles, some are stand alone, some are higher and some are way low which makes them hard to see. Some don’t have “ALTO” on them. Be on the lookout for unique signs as you drive the streets in Puerto Peñasco, Rocky Point Mexico. I have a favorite. Downtown, on the corner where Telmex and Rocky Imports is. A lot going on in that photo. The Telmex tower great landmark, bicycles locked to the pole, The man selling breakfast tamales from his ice chest, the Green and Blue Tec-Med trash dumpster.

A street sign with both names, and the blue wheelchair ramp, and the most unique thing, an available parking space! When you see one that looks like it has a dog house, take a closer look, it is an altar for someone who may have been killed in a traffic accident on that corner. There are flowers and a candle inside. I had to do a double take to catch that.