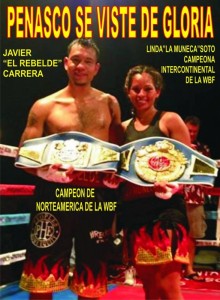 In what was a big night of boxing, the World Boxing Federation (WBF) crowned three new champions in Mexico on Saturday August 17.

Soto put on a convincing performance against the brave Kareli Lopez, and was awarded a clear unanimous decision. Judges Enrique Sotelo, Jose Garduno and Manuel Rincon scored it 100-90, 99-91 and 99-91. Referee was Juan Jose Ramirez.

In the co-feature, Javier Carrera stopped Augusto Gamez by technical knockout in round four, when the doctor advised referee Juan Jose Ramirez that a cut on the eyelid of Gamez was too bad to let him continue. Time of the stoppage was 2:19.

This was a rematch of their original meeting this past March, where Carrera won a close majority decision. Picking up his careers first title, Carrera moved his professional ledger to 13-1 (10), while former Sonora State Champion Gamez drops to 13-14-1 (10). The show was promoted by Promociones Soto.

Around 1200 miles away in Jalpa, located in Zacatecas state, it was a true battle for local bragging rights, as Ana Arrazola and Guadalupe Martinez, both from the city of Tlalnepantla, squared off for the vacant WBF Womens World Light Flyweight championship.

Arrazola proved to be the much superior fighter, but a game Martinez hung in there for the full distance to see judges Erica Contreras, Carlos Ruiz and Carlos Monreal all favor her opponent with scores of 100-90. Referee was Ivan Guerrero.

The new WBF World Champion now spots a record of 18-9-2 (13), while Martinez, losing her second straight world title-challenge by decision, drops to 4-4 (3). Promoter of the fight was Ansel Promotions.