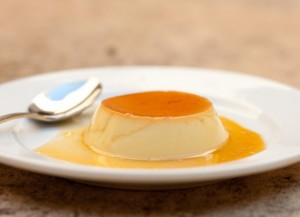 Flan is found in recipes as far back as ancient Rome. It was during Roman times that domesticated chickens were first kept for laying eggs. The Romans, with eggs in surplus, and consulting the Greek’s knowledge of the art of cooking, developed new recipes, one of which turned out to be a custardy concoction known as flan. It was originally a savory dish (not sweet, but aromatic and pleasing to the palate). The Romans concocted many dishes that we might find interesting, such as eel flan. They also had a very nice sweet flan that was flavored with honey.

The Roman Empire was destined to fall and on its ruins arose Medieval society. Yet the transition between ancient times and Medieval – though often violent – was somewhat contiguous. Flan survived barbarian invasions (and perhaps pacified a barbarian or two). It surfaced as a generally sweet dish but still based on the old idea of mixing crème and eggs to form custard. Our word for flan actually is derived from the Latin, “flado” (meaning flat cake), which became “flaon” in Old French.

Interestingly, flan found two different outlets. In Spain it became sweet custard generally made with caramelized sugar. The mixture of milk, eggs and sugar was cooked slowly in crocks and relished by many. Besides the Roman influence, the Moors introduced citrus and almonds which are commonly found to flavor flan. Once Christopher Columbus found America the rush to the riches of the region brought the richness of flan with it. Nearly all of Central and South America loves flan in its various custardy forms. It has become especially associated with Mexico where flan is exquisitely produced in the kitchens of rich and poor alike.

England, with its love for pastry crusts, went its own way and developed a different kind of flan. This one makes use of a pastry shell with an open top filled with custard and often mixed with nuts or fruit. This is the flan that is often mentioned in the literature of England and gets high marks in Brian Jacques’ Redwall series. The characters there make and “scoff” several flans in every volume of adventure.

There is some dispute about how the word “flan” is pronounced. This is easily sorted out, as the English flan is pronounced to rhyme with “plan”, while the Spanish or Mexican style flan is pronounced more like “faun”. With modern innovations there are now flan recipes to suit every taste, Spanish and English, savory or sweet. However you pronounce it, the taste remains amazing…