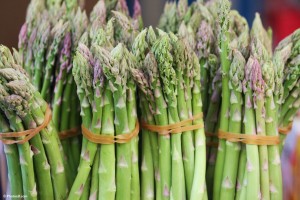 Its asparagus season and Peñasco’s nearby neighbor, Caborca, produces a lot of the stuff. The USA imports tons from the area each year. Large amounts also make their way to Rocky Point at this time of year. Even though production is down this year, you can find fresh, inexpensive asparagus at the farmers markets, grocery stores, and there are usually even independent sellers on the street corners and walking among the cars at major intersections.

While California production of asparagus begins to ramp up this month, most supplies of the vegetable are still coming from outside of the United States but volumes of Mexican imports have been down this season.

“This month, the majority of asparagus is coming from Caborca, in the Mexican state of Sonora,” said Kristen Francisco, vice president of sales and marketing for Gourmet Trading Company. “California has also started their production, and we will start to see slightly more asparagus from Peru as we ramp up for Easter demand.” But production out of Caborca has been light this season, and the level of production going forward is uncertain.

“There is a lot of speculation about what caused the downturn in volume this year in Caborca,” said Francisco. “It is generally believed that it’s a combination of over-harvesting for the past two seasons, heavy rains and large insect and disease pressures before harvest.” Supplies from Washington and Michigan are expected to arrive on the market next month.