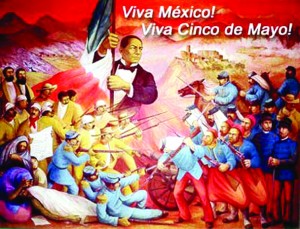 Welcome to Rocky Point! The following is just a brief synopsis on the history of the Cinco de Mayo celebration. No, it is NOT Mexican Independence Day like most gringos think, with or without tequila and beers. (get a clue gringos) It has however, become a major drinking holiday/event in the U.S. and is another good reason to hoist a cocktail at the beach here in Rocky Point too. Enjoy.

The Mexican-American War of 1846-48, the Mexican Civil War of 1858, and the Reform Wars of 1860 left the Mexican Treasury in ruins and nearly bankrupt. In 1861, Mexican President Benito Juárez announced that all foreign debt payments would be suspended for two years. France, Britain, and Spain sent their naval forces to Veracruz to demand reimbursement. Britain and Spain negotiated with Mexico and withdrew, but Napoleon decided instead to establish a Latin empire in Mexico.

The French fleet stormed Veracruz, forcing President Juárez to retreat, and continued advancing towards Mexico City. The French followed, but met heavy resistance from the Mexicans near Puebla. The battle raged with 8,000 well-armed French troops attacking the lightly equipped Mexican army of only 4,000 troops. But on May 5, 1862, the Mexicans won the Battle of Puebla against the French. This is why we celebrate Cinco de Mayo, a truly international holiday!

The victory significantly boosted the morale of the Mexican army and the Mexican people. Not only did the victory prevent the French from taking over Mexico, but also it stopped the French from advancing northward into the United States, which was undergoing its own Civil War at the time. The U.S. Confederacy of the south was receiving support from the French, and if the French had won the battle of Puebla, the Confederacy would have had the unbridled support of the French and may have won the Civil War as a result! No European forces have invaded a country in the Americas ever since.

The paragraphs above are just a little food for thought. Consider this your “I learned something new today” story, to educate your friends back in the states. If you already knew this, then don’t spend any more time reading, you better get to drinkin’ and proving your friends wrong. It’s their turn to buy you a drink anyway, isn’t it?

Disclaimer: The information above may or may not be even remotely true and, there is the possibility that it could have been altered, borrowed, plagiarized, or overheard at a local bar. Furthermore, no person involved in the writing of this article participated in the Battle of Puebla nor, is responsible for hangovers suffered throughout the U.S. or Mexico due to the celebration of this holiday.