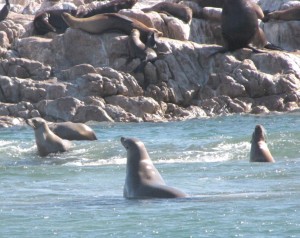 ¡Ay caramba! What a month August was. Curiosity landed triumphantly on Mars. The Olympic Games showcased the world’s best athletes. And we started piano lessons for the first time in our lives. When it comes to new tricks, this old dog may be barking up the wrong tree, but anything to keep the senses sharp is okay by me.

While practicing my Chopsticks last week, I recalled my first visit to Rocky Point, and how I came to learn about Bird Island, formally known as Isla San Jorge. It happened like this:

It’s 20-some years ago. Sandy and I are enjoying bottles of icy Dos Equis on the deck at The Pit. After getting a sharp elbow jabbed into in my side, I aim my binoculars away from the bathing beauties on the beach, and scan the ocean. I see a tight group of three cream-colored pyramids on the southeast horizon. I say, “What the heck is that?”

A guy nearby says, “It’s a mirage.” He takes a slug of margarita and continues, “I chartered a boat to go see what that was, and after three hours we never got any closer, so it has to be a mirage.” Another guy says, “You crazy old coot. That’s Bird Island. It’s about 25 miles out, and I was snorkeling there yesterday.” “So why does it look like pyramids?” the first guy says. And the second guy says, “Depending on the humidity and angle of the sun, it can also look like an office building or an aircraft carrier.” The first guy says, “After a couple more drinks it will probably look like Kirstie Alley’s butt.” The second guy says, “I don’t think mirages get that big.”

Since that day so long ago, I have visited Bird Island many times, and it’s always fascinating. When you are within five or six miles, it does seem to take forever to get close enough to see what it is, and it can certainly look like a mysterious mirage.

But Bird Island is not just one island. It’s a cluster of mini-mountaintops poking up from the surface like a few of Madonna’s brassieres. The first thing you notice is the color. The rocky promontories are pretty much covered in bird poop that has been deposited over thousands of years. Then there’s the noise. Thousands of screeching birds make a huge racket, and they are accompanied by the grunts and barks and bleats of hundreds of seals and sea lions that sun themselves and raise their young on the rocky ledges. Perhaps the most unsavory aspect of the place is the smell. It’s like a barrel of fish guts rotting in the dead of summer, but much worse. That said, it’s bearable if you stay 50 yards away.

Bird Island is a bird sanctuary protected by law, so you can’t go ashore except in an emergency, which does not include bathroom breaks or camping out with your cutie. Also, fishing nearby is discouraged by occasional Mexican Navy patrols. However, it’s an excellent place to sightsee and snorkel, and reasonably priced day trips are well worth it.

In a future column, Cap’n Greg will tell you about another destination that can look like a mirage, even without the influence of too many margaritas. While the landmass of Baja California to the west may look close enough you could swim over there, it’s all of 78 miles to the fishing village of San Felipe. 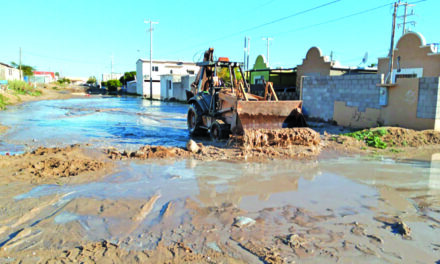