Tony’s Mystic Whale Tours The Experience of a Lifetime 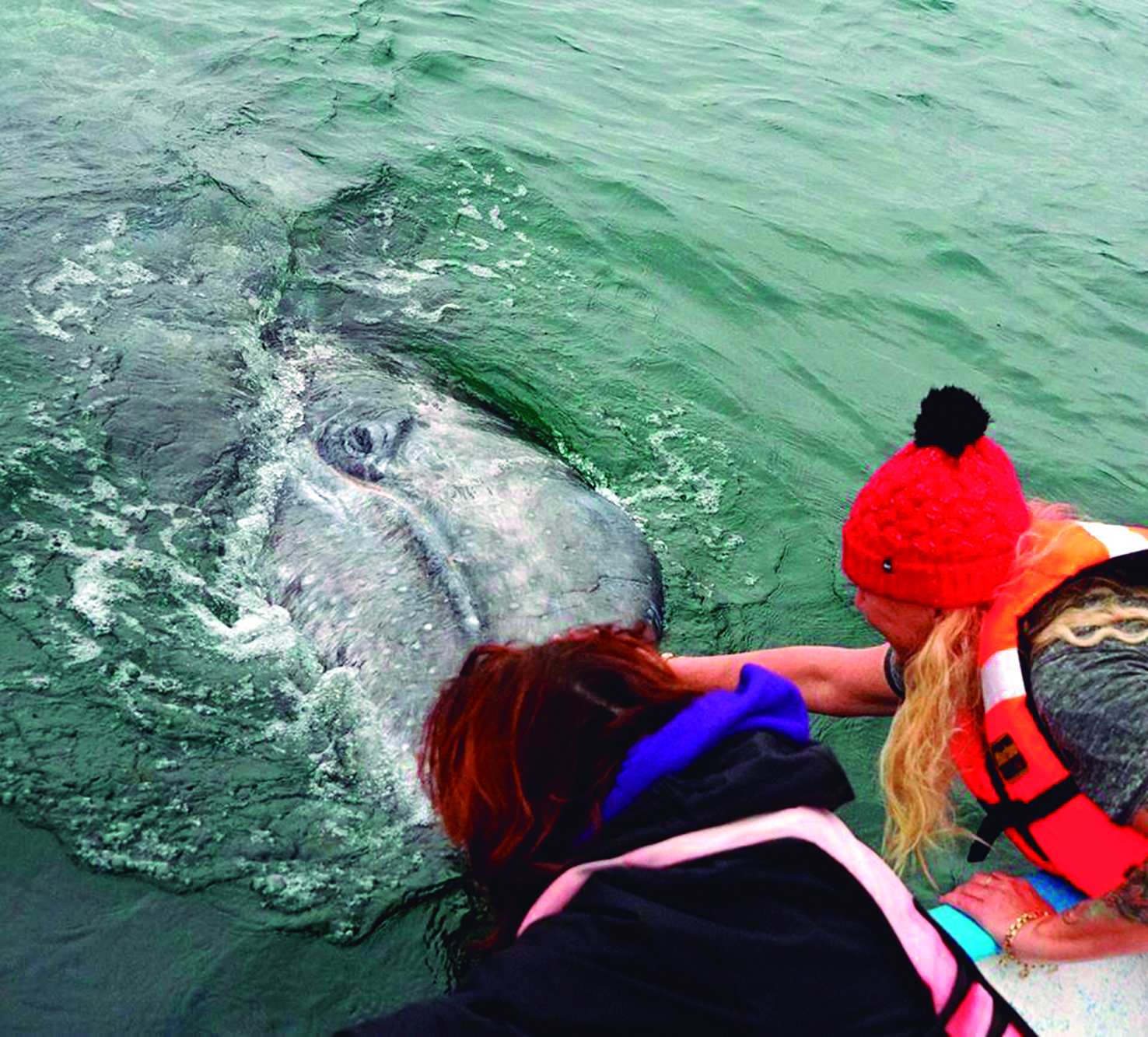 Looking through photos (for this article) of my trip to Guerrero Negro last February, I got super excited…again! Every time I talk about the trip, or think about the trip, I get so excited. I’ve been waiting almost a year to get back to Laguna Ojo de Liebre with Tony Ballesteros, owner and operator of (Tony’s) Mystic Whale Tours, to have amazing interactions with grey whales. (Not CAPping grey whales just takes something away from their awesomeness so, from here on out, they will be Grey Whales to heck with English language rules!)  Just look at this first photo of Candy and I and this brand-new baby! OMG! How incredible is that? A month or two old and this giant little baby is letting us pet it – in its natural habitat. Rest assured that its mother is not far away – most likely just under our panga – ready to roll us if we do anything sketchy…lucky for us, we didn’t. It was absolutely amazing how trusting they were. Such an incredible trip!

These crusty-looking, but surprisingly-soft gentle giants grow to be anywhere from 49’ to 60’…that’s a semi-truck, without the truck, but still! Imagine a panga sitting on top of a semi…ah, now you get it. Now picture 8 semi’s and one panga…pretty awesome and scary as heck, right? And they can weigh up to 80,000 pounds, though I’m pretty sure my “Blanca” was tippin’ at 100,000 lbs. She was absolutely huge and quite the a-hole, but more about her later. Oh, btw, the cover photo on this month’s RPTimes was taken by Mary Snyder of Encantame Towers, and more about her later too. We actually had 8 of these guys around our panga at one point on our trip. Oh, yeah, our weekend trip that turned into a week because we didn’t want to come home…more about that later as well.

I can already tell that this story is going to be a lot of babbling and repetition about how amazing the whales are, and it’s going to go on for months so, I’ll tell you right now, this is an experience you definitely want to have, and the season goes from January 13th through April 13th, so call Tony at (520) 249-2337 or email him at tonyballesteros2@msn.com, website www.mysticwhaletours.com. He’s a self-proclaimed “Whale Whisperer” and anyone who has been with him knows he speaks the truth. And besides being the Whale Whisperer, he is a pro-photographer, so you get awesome photos as well.

(Mary Snyder, Me and Mario after breakfast at Ojo de Liebre Lagoon)

Allrighty, onto a little history thanks to Wikipedia, UNESCO, Google and Tony…I’m going to skip the part about this dude, Charles Scammon, in the early 1850s killing whales, by the hundreds in the bay – not a fan – so you can read about that all on your own. But there are multiple references to him when you look up the origin of the name, Ojo de Liebre: Scammon was slaughtering so many whales, back in the day, that the lagoon water turned bright red just like a jack rabbit’s eye. (There are even wines of the same name, just FYI.) Tony says that from the satellite view of the lagoon it looks like the eye of a jackrabbit, and he also confirms the bloody red water story. I do believe he would rather not retell the latter because he loves the whales so much and doesn’t want to think of the brutality – nor do I. It’s hard to imagine anyone killing them after you look into their eyes and touch them – though I imagine Scammon never did that. There is something wonderful about a baby (or mama) rolling onto its side and just laying there gazing up at you while you rub their rubbery skin – especially the babies – so innocent and beautiful. Amazing that they even trust humans anymore. Perhaps I am projecting my human emotions onto the ocean creatures, but go out there and experience it for yourself, and I’m pretty sure you will come to the same conclusion.

Okay, onto the mating and birthing of Grey Whales – or reproduction and wintering as UNESCO so beautifully states. There are these two lagoons (San Ignacio and Ojo de Liebre ) on the Pacific Ocean side of Baja where Grey Whales go, year after year, like clockwork, to mate, birth and teach their babies. These lagoons are contained within the Vizcaino Biosphere Reserve, which is Mexico’s largest protected area. According to UNESCO (El Vizcaino Biosphere Reserve is a UNESCO World Heritage Site), the protection of these winter breeding grounds – these two lagoons in particular, has been paramount in the recovery of this species, after the near-extinction of commercial whaling. At one time there were as few as 2,000 Grey Whales left.

The depth, temperature, nutrients, and salinity make these two lagoons ideal mating, breeding and calving grounds. El Vizcaino Biosphere is also home to numerous marine mammals as well as an eco-wonderland: Bottlenose Dolphins, California Sea Lions, Harbor Seals, northern elephant seal, blue whale, as well as green and loggerhead sea turtles, fishies, birds…Brant Goose, osprey and crustaceans all hang out here; and wetlands, marshes, sand dunes, desert, mangroves and halophytes all exist here as well. (Side note: Halophytes are actually pretty interesting – not only do the help with erosion, but they provide shelter, and you can actually eat them…I’ve chomped on some along our beaches, super salty – obviously, but some restaurants around town have actually done a decent job at serving them as a garnish/side dish. And I only know about them because I used to date a guy that travelled around the world, including Puerto Peñasco, teaching indigenous people how to grow them…if you’re reading this, Hi Randy lol.)

Ojo de Liebre Lagoon, according to the site’s information placard by their whale skeleton, is 5.6 miles wide, 2.5 miles long and 16 to 39 ft. deep, though deeper channels run through there and Tony knows the secret spots where the super deep channels are and where the water is constantly churning with activity. These deep areas are “teaching” areas while the “touristy” areas, in the calmer and closer waters, where all the other pangas stay, were more of socialization grounds for babies. Tony told us that the bay’s entrance is guarded by the male Grey Whales – they patrol and keep Orca’s (killer whales) out of the lagoon and away from the newborns. Even though a Grey whale is born at about 5 meters long and 500 kilos, it’s still a tasty snack for an Orca. The baby Grey Whales (calves) drink approximately 18.5 gallons of milk a day and stay with their mother’s for about one year – or until they are able to fend for themselves. They are born with dark skin and are super smooth and some have a wrinkly “nose”. Their skin color does change over time and they acquire barnacles or sea lice and other scuffs and knicks as they migrate some 6,000 miles from the Bering Sea to the Sea of Cortez. The adult Grey Whales mate in the lagoons of Baja, California and then return the next year to give birth. There are 3 whales involved in the mating act, but we won’t talk about that – Google will tell you need to know. Let’s just say you will see some “Pink Floyd’s” and you can ask Tony what that means.

While looking up information about the area I came across an article written by Jack Goodman in 1975 for the New York Times about his 7-day trip from San Diego to Ojo de Liebre and San Ignacio. He said at the time there were between 9,000 and 10,000 Grey Whales making their annual migration (so conservation efforts have certainly paid off). His article also says that around 1973 the Mexican Government had closed the lagoon, hoping to build a road to the bay from the Baja California Highway 1 so their ship was not able to enter, but San Ignacio was kept open and that is where they spent 2 days. He goes on to say that, “…the dinghies took each passenger for two or three whale runs of an hour’s duration each day, which is enough to soak most clothing and nearly every camera, but is scarcely enough to satiate avid whalechasing appetites”. I don’t think I could’ve said it better myself…once you get that first touch – even the first glimpse, you’re hooked. Exactly the reason my weekend trip turned into a week. We didn’t get that wet, but every day was a new experience that left you wanting more and more.

Okay, I’ll leave you with these last photos of our flight from Puerto Peñasco to Guerrero Negro and continue Part II in next month’s edition. I have some good stories to tell! Go with Tony and get to Guerrero Negro in 1 hour and be whale petting that same day! He arranges the flight, accommodations, dinner, private whale tours and you have your own personal photographer – what could be more perfect? Plus you get some swag and the experience of a lifetime. Check out the top of this article and contact Tony to book your trip this year.

Our own private airplane taking off from Peñasco

Me (with Mary Snyder) seeing how small our plane was. Super smooth ride. Not a bump on the entire trip. Loved our pilot!

Flying over the Mayan Palace – pretty sure this was Mary’s photo, as are a lot of these, but I’ll happily claim credit for all!

Flying over Bird Island in the Sea of Cortez

Flying over Baja, California on our way to Guerrero Negro on the Pacific Ocean 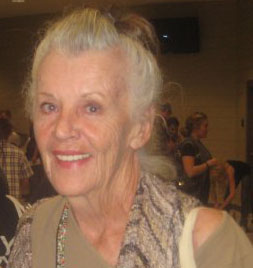 The Making of the KAHOOLA

Why wouldn’t you build your custom dream home at Laguna Shores Oceanfront Resort?