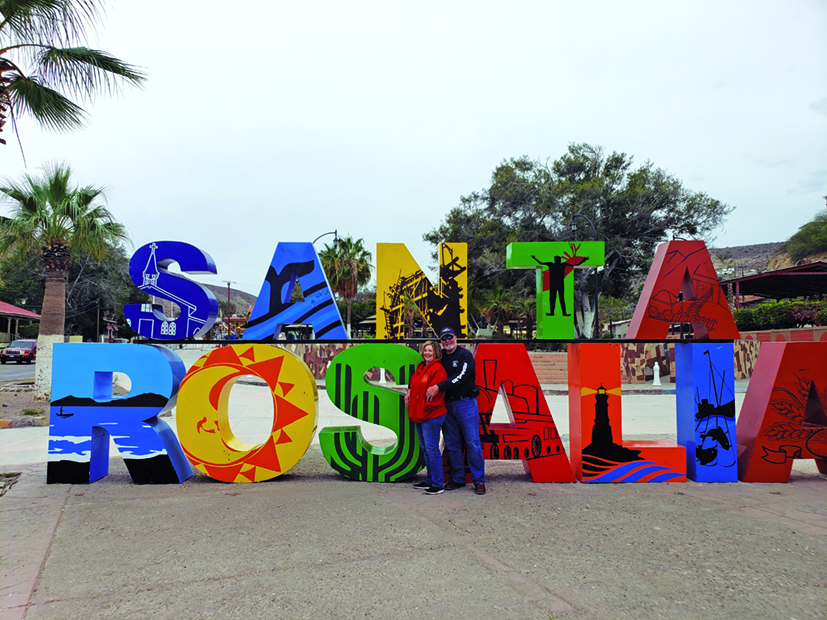 While we knew we had to leave San Ignacio, we did so reluctantly. Our tour of Baja California required that we keep on keepin’ on…so off we went.

Traveling Mexico Highway 1 from San Ignacio eastward, we climbed up, around, down and over the mountain switchbacks for about forty-five miles until we arrived on the east coast of Baja Sur, at the industrial town of Santa Rosalia. The town has an interesting history dating back to when the French controlled Mexico under Emperor Maxmillian (1858-1872). Santa Rosalia became a center for ore smelting and mining. Many of the old industrial buildings and the equipment are still around and can be toured, including a huge smokestack now laying on its side as well as an old steam engine used to haul the ore trains. With a deep water port, and access to Guaymas across the Sea of Cortez on the mainland, the main streets of this working town are reminiscent of the old west town facades in Arizona, Texas and New Mexico of the pre and post-Civil War Era. The French influence is nowhere to be seen these days, but Gustav Eiffel (yeah, the Eiffel Tower Gustav Eiffel) liked the town well enough to design, build and transport a steel church building from France. The church is still active today and, if you are lucky enough to get inside during your visit, make sure you go up to the altar and stand where the priest stands…I’ll say no more. Today Santa Rosalia can best be described as “gritty” but if you take a little time to explore it you will find it worth your while.

Driving south out of Santa Rosalia, we made our way to Mulegé, a town for which I have great affection. This town of about 3,500 souls is typical of many small villages throughout the Baja peninsula, and mainland Mexico as well. It has a central square, or zocalo, surrounded by the various shops and businesses of the community. I recommend a meal, any meal, at historic Las Casitas. My friend, Xavier, is a gracious host and has made this little oasis a very worthwhile place to take your ease under the floral canopy while resting from your explorations of this quaint town.

While there is no Mission Church as in San Ignacio, there are cave paintings that can be toured. Just ask any of the cab drivers, they’ll point you to a cabbie named Salvador Castro Drew, who is bilingual and can give you a great tour of these prehistoric sites.

We stayed at the venerable Hotel Serenidad just off the road south of town…just because. Serenidad has a 3300-foot dirt runway, and local bush pilots (yours truly included) fly in regularly, taxi to the ramp and walk through the welcome arch to enjoy this small piece of heaven on the east coast of Baja. Don Johnson and his wife started (1952) and ran the Hotel Serenidad until his death at 94 years old last year. Don was one of a kind and will be missed! Every Saturday from 1952 until today, Serenidad holds a legendary pig roast. Not to be missed! Also not to be missed, are the “welcome” Margaritas which immediately ‘ground’ any pilot that drinks one. No flying after consuming one of these bad boys…walking can also problematic. If you are ambulatory, however, a walk along the banks of the lazy Rio Mulegé (about a mile or so) into town is a worthwhile trek and will give you a real sense of what the town and surrounding area is like. Did I mention that the Serenidad has a full kitchen and serves excellent food in a wonderfully authentic dining room?

After spending a leisurely couple of days in Mulegé at the Hotel Serenidad, we continued our trip. Next stop, Loreto! The drive along the coast out of Mulegé is, in a word, spectacular! Following the coastal highway, you are driving along the shores of Bahia de Concepcion, one of the most beautiful bodies of water you might ever see.  White sand beaches abound, mountains and hills are all around. The beaches can easily be accessed off Highway 1. The bay is surrounded on two sides by phalanxes of 3,000’ mountains (the heights are known because I’ve flown over them). The pristine, sparkling azure waters attract campers, hikers and boaters from all over the world. There are too many places to boat, hike and/or camp to even begin to select one, so if you go, pick one! If you are thinking about going to Bahia Concepcion, I’d do it sooner rather than later. It has been, I believe the term is, “discovered.” Once wild and uninhabited the area is slowly being ‘civilized’ and more is the pity.

Two hours of driving along the bay, and a little inland along the coast, brings us to Loreto, “El Pueblo Magico”. Loreto was once the historic capital of all the “Californias” claimed by Spain (Baja Sur, Baj Norte and Alta California). In the 17th Century the Padre Kino and the jesuits arrived here and immediately set about ‘civilizing’ the area.  In addition to building a Mission (Mission de Nuestra Señora de Loreto, October 25, 1679-not to be missed, especially the museum!!), they began farming, vineyard and live stock operations.

While no longer the capital city of Baja Sur, this town of 20,000 or so has so much to offer that “a couple of days” just doesn’t do it. There are many accommodations, that will fit any budget from camping to the full resort treatment, to be had in Loreto. Having visited this lovely town many times before, our personal favorite is La Posada de las Flores, a boutique hotel that is situated right at the zocalo and the beginning of “El Camino Real” (the royal road) whose cobblestone street is shaded by a tunnel of citrus trees, which have grown to span the road, and are beautifully trimmed so as to offer a delightful experience for shopping and strolling.

The places to eat are many and varied; Mediterraneo, on the malecon, is a favorite of ours, but there are many, many more. Once you’ve experienced Loreto, you’ll want to return because, unless you’ve got a lot of time to explore it, you simply cannot see it all!

As much as we would have liked to stay longer, continuing our trip was the imperative. After bidding a very fond farewell to El Pueblo Magico, we, once again, headed south. Next stop, the cosmopolitan capital city of Baja Sur, La Paz. Adventure awaits! 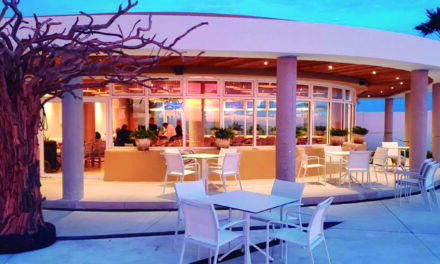 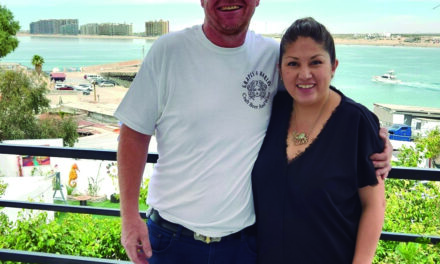