The Remarkable Rocky Point and the Blue Footed Booby 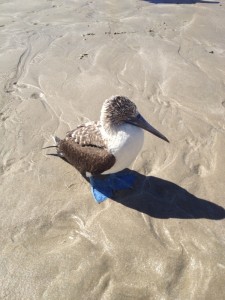 “That sure was something”, my husband remarked on the return trip home from Puerto Penasco on Sunday.
“What was?” I wondered, as the weekend sure had a lot of something’s.
Was it the stalking seagull, flying narrowly close to our heads as we were playing fetch on the beach with our dog, who then swooped down fetched the red racquet ball up with his beak, only to suddenly realize it was not food and plopped it quickly it into the ocean?
Was it the delicious tasty gorgonzola filet and penne pasta at Mare Blu restaurant with soft soulful live piano and guitar music playing softly in the ocean view venue and then just a walk next door to a night of heart beating rock ballads and dancing followers of Roger Clyne and the Peacemakers concert right on the beach?
Or was it the amazing meet and greet with the Blue Footed Booby, originally from Galapagos Island? Yes, we did say Blue Footed Booby.
It is hard to say what the most amazing thing is about a wonderful weekend in Rocky Point, quite frankly because it is all very much amazing. The weather is outstanding, folks are smiling, friends are visiting and there is so much to do it’s hard to decide what direction to go. One walk down the beach and children are building sand sculptures, dogs are playing and people are saying hello as they walk by you on a very uncrowded beach. That is amazing in itself, two words that typically don’t go together, beach and uncrowded, are hard to find when the weather is outstanding, but here in Rocky Point, no large overcrowding, plenty of room to lay your beach towel, throw a Frisbee, or fly a kite.
It never seems to surprise me, for each time I spend some time away from our little beach haven, new business, new paved roads, new signs are abundant and sprouting up in all directions. Driving into town, it’s fun to point saying “that’s new or that’s paved”. Rocky Point now welcomes another national chain, Little Caesar Pizza, and many new local restaurants and bars in the last 6 months, just to name a few, Yummi salads, Texas Taco (great tacos), El Tapeo wine bar, (in Playa Bonita complex, Laos Mar Hotel check this place out), Ocean view Steakhouse at Sonoran Sky (now serving breakfast buffet and specials) and many more old and new eateries serving Mexican specialties, delectable shrimp and fresh seafood.
But let’s get back to the opening comment. “That sure was something”. Yes, the comment was regarding the Blue Footed Booby. Why so much commotion about a Blue footed Booby? Well, for starters let me ask you this, have you ever seen a Blue Footed Booby walking on the beach just a mere 2 feet away? You would definitely know it if you had, as their feet are shockingly blue. Blue, Blue Blue.
Yes, this was a very rare bird who was sitting on Sandy Beach, between Puerta Privada and Las Palomas being friendly to all who walked by. With little fear of humans and bright blue feet, it walked in a small circle quietly than sat on its webbed feet, hiding the anomaly. They say the bluer the feet, the more charming they are to his mate, well this male must have been a hot stud in the booby world. He sure had blue feet.
There were several of us, who saw the bird, and we were concerned it was disoriented or possibly injured; one woman who lives in Puerta Privada was going to check with a local vet if it had not taken flight. The background of a Blue Footed Booby goes back to Charles Darwin to the Galapagos Island. Most tourists who visit the Galapagos come home with a picture of the blue footed bird. According to Wikipedia, the majority of all breeding pairs mate in the Galapagos but their range can be up to the Gulf of California, generally on the West side. The name comes from the stumbling around on the ground, which is why we might have thought it was hurt or drunk, but the name Booby comes from its foolishness to be close to people and not being as sure footed as other birds.
There are Brown Footed Booby’s and Blue Footed Booby’s but the brightness of the Blue Footed Booby’s feet, as my husband says, “sure is something”.
Whatever your reason to visit Rocky Point in the next coming months, I hope you find your “something” that astonishes you. It may not be the Blue Footed Booby, but there are plenty of other things to be excited about and to experience here at the seashore, just plan your next trip and check out whatever it is you find remarkable!

Hang in there. It is astonishing how short a time it can take for very wonderful things to happen.

Anita Kaltenbaugh is the Mexico travel examiner at examiner.com and author of the book “Travel Secrets- Insider guide to planning, affording and taking more vacations” available on the Kindle, and Amazon.com.

6 ways to get Beach Therapy

Is Rocky Point better than vacationing in a Caribbean island?