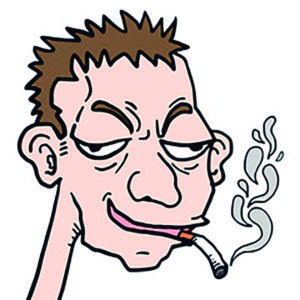 When I was a kid smoking came with greater acceptance than it does today. A majority of our parents regularly enjoyed smoking and indulged themselves often becoming heavy smokers. When does an individual start smoking? For me, it was right after I stole a pack of my old man’s Winston’s, then snuck out to fire-one-up. When the smoke hit the system my face turned to a ghastly pallor of green signalling I was sick-as-a-dog. Did I stop smoking? No I hit the accelerator. By the time I entered the military at 17-years-of-age I was up to two packs a day. To support my addiction the Army issued C-rations (developed during WWII) that came with small packs of Lucky Strike, Pall Mall or Camel cigarettes. The irony was that years later my VA doctor insisted I quit using tobacco, evidently she never understood the calming nature a good WWII cigarette provided. Over the years I’ve quit smoking multiple times. Was I successful? Well now, that depends on your definition of success. What remains after years of quitting is what I call a “cigarette bum”, or a person that borrows cigarettes from others while announcing an intention to quit. Most of my smoking friends put up with this annoying behavior because they’re my friends and because I do pay them back from time to time by purchasing replacement packs. A good question might be to ask about why people smoke. Madison Avenue sold sex appeal, adventure, mystery and other clever points to get us puffing. That was some sales job. Since that time a war has been waged between smokers and non-smokers. The main issue centers on health, you know secondhand smoke and other small problematic concerns. Personally, I’ve always thought it has more do with smell. Smoking creates an odiferous environment, meaning cigarettes stink, but determined smokers never realize this because their sense of smell has long been destroyed. It’s a catch-22, non-smokers are offended by the fetid smell, and the smokers can’t smell. Non-smokers will complain about smoke in a vehicle, on clothes, indoors or almost anywhere. When confronted I agree and remind them of the glory days when smoking was allowed on airliners, nothing like taking a long journey riding in the bottom of a dirty ashtray. To solve this problem the government has taken us on a severe ride by limiting where we smoke. My favorite is San Diego with beaches that proudly boast of a constant 25 mph offshore breeze and the local government has made it illegal to smoke on the beach for fear of the consequences from secondhand smoke. Really? My advice is if you don’t smoke don’t start or if you do smoke quit. Excuse me just a moment, “Hey buddy, have you got an extra smoke?”

Booze and the Beach