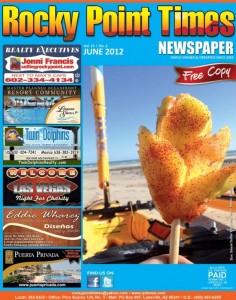 Here we are mid May, which is deadline for me to write my Editorial our June issue. We have a big, big Memorial Day Weekend coming up, so we will report on that in the July issue, but we are sure that it will be a good one. Word from our friends is that the town will, once again be full. Really full. The town needs that, and deserves it, too! Just this month Rocky Point offered many events: Over Cinco de Mayo Weekend, we had over 50 people join us on our 32nd bi-annual Rocky Point Times El Golfo 4×4 Run – 3 days and two nights in El Golfo de Santa Clara, finishing up back in Puerto Peñasco with our ‘Survivors Dinner’ at La Casa del Capitan Restaurant on the top of Whale Hill. Thanks Cristina for your, as we all agreed, excellent service, GREAT Margaritas, and superb food! For many of the brave souls who joined us, the El Golfo Run had been on their bucket list for a while, and now they can scratch it off. Fun was had by all. What a great weekend! The next trip Sandy is planning for the 26th-27th-28th of October. So, if this has been on YOUR bucket list, make your plans now. Also, the same weekend, Peñasco had it’s first (as far as I can remember) Doggie Fashion Show over in the Mirador Area, at Paradise Beach Club where children and pets are always welcomed. Same weekend was the Tequila & Mariachi Fest in Old Port. Then, on May 11th, Mark Mulligan (congrats, Mark, on your new baby girl!) swooped into town for a one-night-only performance, sponsored by SeaSide Reservations. And then there was the ever popular Chili-Cook-Off at JJ’s Cantina in Cholla Bay. Also in Cholla Bay was the final phase of the CBSC Annual Fishing Derby and the Fish Fry. The Mayan Resort held it’s 2nd Annual Uniting Nations Cup Golf with over 80 golfers from US and Mexico signed up to compete during the 4 day event. Las Conchas held their Annual Las Conchas Party (Sandy says, “Sorry”, for flubbing the date). Memorial Weekend the Rocky Point Riders 4th Annual Bikers Beach Fest was held, and the Puerto Peñasco Business EXPO was sold out in the Shrimp Plaza.
Before I give you some of the highlights for June, I have to WARN you, once again about following the speed limit. For those people who reported seeing my white Denali pick-up pulled over on the Peñasco/Sonoyta Hwy by four, count ‘em 4, black and whites…yes, that was me driving. I had just passed the car in front of me and, yes, I was going a bit over the limit and, yes, I was lucky and told to, “Slow it down”. The reason for the 4 units was that the ‘first’ one just happened to be the Comandante, the Boss, and the other 3 pulled up to see who he had ‘caught’. Whoa! But seriously, we have been receiving many reports from travelers who say they have been stopped for ‘speeding’ through the town of Sonoyta, especially at the south end as you come over the little knoll and must DROP TO 40km…NOT 40mph. So, once again, let me say FOLLOW THE SPEED LIMIT SIGNS (even if the locals don’t, and you seem to be holding up traffic), and NEVER PAY CASH TO A OFFICER ON THE STREET! It’s not only in Mexico where you must be vigilant about the speed limits. Why, Ajo and Gila Bend have slow sections, and last week for the first time ever, Sandy and I saw a Sheriff unit tucked back in the Mesquites and Palo Verdes at the Border Patrol Checkpoint, south of Why, AZ, where the signs tell you to drop from 65, down to 55, 45, 35, 25, and finally 15 mph. After Sandy posted the sighting on our Rocky Point Times Facebook Page, we found out that we were way behind the times. Many people had already seen, and experienced the sting of a speeding ticket in the areas around the Checkpoints.
Ok, on to two huge events one planned for June, and one for July: The June ‘biggie, is RCPM-Roger Clyne and the Peacemakers will be back in Rocky Point for 3 big days! Friday, June 8th, at JJ’s Cantina in Cholla Bay for “A Hot Dog and A Smile”, Saturday, June 9th, at Wrecked at the Reef (new venue) for the big concert, and Sunday, the 10th back at JJ’s Cantina for Bloody Mary’s at the Mañanathon. For information and tickets go to www.azpeacemakers.com. The new event planned for July will be the 1st Annual Las Vegas Night sponsored by the Sonoran Resorts and the City of Puerto Peñasco. The date is July 7th.

The Poled Man and the Sea