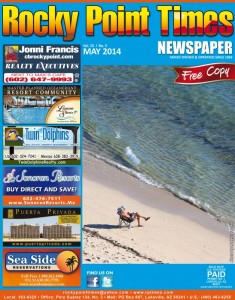 I used to consider May to be the best month to be here in Rocky Point, Mexico, but having great weather all year, this year I’m not so sure anymore. If it doesn’t get humid – it can get hotter – then it will remain my pick. The weather has been so agreeable this year, but I have a little niggle in the back of my head that says we are going to be slammed in the late summer months (I think the ‘niggle’s’ name is Sandy). But, as stated many times…it may get hot and humid, but the beer is always ice cold and we have the ocean.

Looking back to our May 1996 Edition, Tom’s Editorial was short which tells me he and Mom were out having too much fun for him to sit down and take time to write. He interviewed Dr. Vazquez and one of the things that stood out for me was when Dr. V. said, “Don’t judge the doctor by his/her surroundings or whether he is in a suit and tie” (not verbatim but you get the drift). It is up there with the most valuable lessons I have learned while living here (not that I was “judgy” before). If you judge people here in Rocky Point, or anywhere, by what they have or don’t have or look like then you will be missing out on a lot of great friendships and experiences. Okay, that was my lesson for the month. Oh, and it was 1996 when Puerto Peñasco and the State of Sonora decided that it would be good to try out Daylight Savings Time. What a fiasco. I’m glad it was canned after trying it for a while.

I must thank Judy and Ken Olson from Utah for seeing that my Mother made it home safely from a 9 hour “business lunch” with Karen (last name withheld to protect the borracha) at La Casa del Capitan the first part of April. I heard Karen made it home safely and rolled off of the couch and onto the floor for a two-hour tile “nap”. My Mother is a safety hazard at night – especially when she mistakes her sunglasses for driving glasses and doesn’t notice that it’s really, really dark outside – so if you see her out past sunset, please give her loving daughter a call so I can come and get her.

We posted on our Facebook Page (Rocky Point Times Newspaper) about the young school students, and the elderly, who bag your groceries at the local markets. They rely on your tips for their pay, so please remember to give them some change while you have your wallet open. The students must have good grades and the elderly must be needy to even to qualify as a bagger. The same goes for tipping your waiter or waitress, gas station attendant, boat captain or anyone that provides you service – same as in the U.S. Some of the waiters around town won’t even receive a 5-10% tip on a dinner bill of $60 USD. And you should always tip according to the service you receive. I don’t like to tip a crappy waiter, but I would rather give something and tell them they are crappy than not leave anything at all.

Like I said at the beginning…May is the perfect month…the weather is great – better than great – it is awesome: the water gets warm, so many parties and events to attend, and so much activity all around town. Our ongoing road construction is a pain in the keester, but that’s the sacrifice for roads that don’t break your shocks. Speaking of…the main blvd. Benito Juarez was opened on the west side during Semana Santa (Easter week) from Calle 26 (Noreeleccion) north and Samuel Ocaña (although it was also opened during Semana Santa) is still closed at the main blvd. Just follow everyone else and you’ll be able to get to your destination (as detour signs are non-existent). On the other side of the border we have noticed more and more Sheriff units parked back in the Mesquite trees as you approach the Border Patrol check points so slow down and obey the speed limits.

(480) 463-6255 if you would like to go with us so they can get you a room and keep a head count so we don’t leave anyone in the desert (it has happened before). You can also hit them up on Facebook, or Email rockypointtimes@yahoo.com

I think I mentioned before that there were two ATM’s that issued USD: One in the lobby of the Sonoran Sea Resort on Sandy Beach and another at Banorte on Fremont and Sinaloa (near Reggie’s 8/12).

Okay, on to stuff around Rocky Point…Victor Aleman, who is a world renown spray paint artist and whose shop is on the highway north of town, now has a local jardin (garden). Great location on the (pointy) corner of Benito Juarez and Luis Encinas by the library and anchor statue. He has lots of beautiful pots and huge plants on display so stop by and say hello. And for a larger selection stop by his shop (7 miles north of Rocky Point) on your way into town – or on your way out since you will most definitely want to purchase something.

Some very exciting news for us gals, and guys too, but mostly us gals. Ashley Sanchez (married to Manny, Jr.) has been doing hair in Rocky Point for a number of years is opening up her very own and very elegant salon named CANVAS. From the pictures I’ve seen and what she has described it is going to be beautiful. If you are in need of a great stylist – she is your gal. She has lots of plans for the salon and a lot of experts she will be pulling in for special events so it is something to look forward to. And her Mother will be working with her doing facials, make-up and anything that has to do with the face. She will be opening the first of May (if everything goes good) and is located in Plaza Melanie on Blvd. Fremont. CANVAS is downstairs which is great news for her clients (like my Mom) who can’t climb stairs. Sandy and I already have the first two appointments when she opens. Look for her ad in the Rocky Point Times, of course.

It appears that beach access (stairway to the beach) at the Playa Hermosa project (Between Las Gaviotas and Playa Bonita) was open for Semana Santa. It looks really nice but not sure where pedestrians will park their vehicles. I’m sure they’ll figure it out. Sandy Beach between Esmeralda Resort and Wrecked was opened for the holiday, and even Domino’s Pizza was allowed a permit to sell on the beach. I think that’s a first. Our Semana Santa was seemingly the best we have had in many years. Martin @ Pollo Papago said his week was the best he has had since maybe 2010, and Mom said that Calle 13 was bumper to bumper every day. Maybe 100,000 visitors on our beaches over the long holiday!! 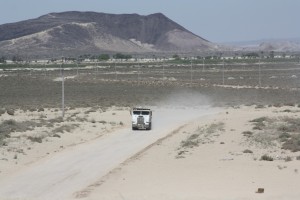 And the Home Port is still being worked on, just had a little hic-cup at the pier as of early April. It appears they are very busy at the Black Mountain rock quarry preparing (or blasting) more rock to be loaded and delivered and, as you can see from the photos, the pier is growing farther out into the Sea.

If you haven’t heard, Roger Clyne – yes, that Roger Clyne – is one of the new owners of Banditos (formerly The Hut, formerly Changos – this is sounding a lot like Prince). He was down in April just hanging out, strumming guitar and singing. How very cool is this? He will just be popping in and out whenever he is in town and, of course, for their concerts, with the next one being in June..so be sure to get your tickets!! Hopefully the bar will transition into something like the Hard Rock Café. A celebrity is in our midst!

And speaking of celebrity – Mark Mulligan, whom we all know and love (we love Roger too), will be in Rocky Point on Memorial Day Weekend to perform at 5:00 PM at the Caribbean Parrot on Sunday, May 24th. Proceeds go to Dialysis Project. So plan on spending Sunday evening with Mark Muligan. Who knows, maybe Roger will show up.

Desserts will be my final note, even though I have asked Sandy to write an “Eats” column, I can’t really fire her now can I? So, she found a new favorite place in the old Jim Bur Plaza (who remembers that name?) on Blvd. Benito Juarez next to the giant TelCel customer service center. The pasteleria is called Suspiros and Sandy and Alicia swear that they have the best tres leches cake. I still think Irma does, but I have not tried Suspiros. They also tried their Chocolate Mazapan Cake and their Mango Cake all of which had rave reviews. I swear all that woman does is eat and drink. Haha sounds like me 10 years ago. Oh, and Anita at Guiseppi’s forced her to buy a slice of their three layer (pink, white & chocolate – like Neopolitan) Italian Cheesecake with walnut crust. She made the mistake of taking it to the office and she only got one tiny bite. So I am guessing it was very good. 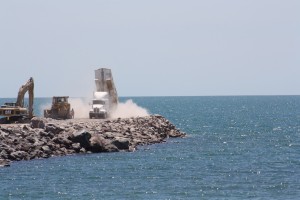 Okay, that’s all I can blather about this month. Remember that this paper goes to print the middle of the month before you get it, so please check our Facebook Page for updates and daily stuff. She (Sandy/Mom) posts from a lot of different sources so you’ll always know what’s going on in Rocky Point. And if you would like to subscribe to the RPTimes (paper copy) you can go to the website www.rptimes.com and click on “subscription” to print the form (I have promised Sandy I will set up online payment for her) or you can email Alicia at rockypointtimes@yahoo.com or phone her at (480) 463-6255

As Tom O’Hare always said, “Just smile”. Remember, we all smile in the same language. Though I have to tell you I did smile and wave AFTER getting the “pase” green light at the border and they pulled me over anyway. So no more smiles and waving!!!!!! Have a great month of May and don’t forget there are 2 Mothers’ Days – different dates for Mexico and the U.S. And of course this is Sandy’s birthday month so starting May 1st she will most likely be telling everyone that she gets a whole month for her birthday and two Mothers’ Days. If only her kids believed it. Hasta luego. See you at the beach!