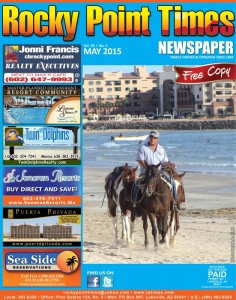 I’ve always considered May to be the perfect month here in Puerto Peñasco, except for last year when the humidity decided to rear its ugly head early. The month of May means the weather hangs between the low to mid-80s, the wind is mild, there are lots of outdoor activities, the water has warmed up enough (for me) to swim in, and the El Golfo Run is here. We will be on the 38th bi-annual El Golfo Run by the time you are reading this. If you have yet to join us, you really ought to put it on your bucket list – it’s a lot of fun with an interesting cast of characters.

Besides all of the new road construction, airline flight into Peñasco, signage, and continued work on our Home Port, Rocky Point can look forward to another music video being shot down here over the first weekend in May. Shooting will mainly take place on Sandy Beach and out at Laguna Shores Resort. You are welcome to come out and join the party at Laguna Shores Resort, maybe be in the music video, meet the crew and star, Nick Nicholson, and enjoy hot dogs and beer and live music throughout the day and night by Ruca. Raised by die-hard deadheads with pure flower power in Cave Creek, AZ, Ruca’s music emanates from a love of organic sounds, grooves that move, and lyrics that flow. Addicted to music and the beauty it brings; her smoky, soulful voice tells her story with a resounding, infectious energy. Since the release of her debut album Flow, she’s been honing her live chops at nightclubs and festivals both with a full band and solo acoustic. No matter the ensemble, Ruca never fails to mesmerize audiences with her raw-silk voice and irrefutable charisma every time she gets behind the mic.

Many of you may remember Nick Nicholson from his last video shot here in Rocky Point titled, “I Wanna Be a Pirate”. The video showcased a lot of our local residents and was a lot of fun to watch – and a very catchy tune. I’ve heard “Countin’ Down To Sunset” and it is fantastic. I can’t say I’m a country music fan, but I did like the song very much and know it will appeal to a lot of you. So come on down to the video shoot or if you can’t make it be sure to purchase your copy of “Countin’ Down To Sunset” in iTunes or Amazon or wherever you buy your favorite music.

Here is a little more information about the music video shoot in Rocky Point from May 1st through the 3rd by Ed Waters. Hope to see you in the video!

“Countin’ Down To Sunset” in Rocky Point

The first weekend in May Puerto Peñasco will be prominently featured as the major location for the filming of “Countin’ Down To Sunset”, the music video for country singing sensation Nick Nicholson’s newest song. Tennessee native Nick made his home in Phoenix (to the delight of his large Arizona fan presence) after serving 10 years in the USAF. Although recently relocating to his beloved south in his move to South Carolina, his ties to the southwest remain strong. Nick has shared the stage across the US with other country artists including Travis Tritt, Mark Willis, the Bellamy Brothers, Chris Young, Toby Keith, David Alan Coe, & many others. He is not only gifted with one of the best voices out there but also with an innate ability to “sing with his soul”. We think Nick’s Nashville produced CD, “Stronger than Whiskey”, is one of the best country music offerings we’ve ever heard. For a sample of Nick’s music, check him out at www.nicknicholsonmusic.com.

This will be the second music video songwriter & award winning video producer Ed Waters has brought to the shores of the Sea of Cortez to film. “I Wanna Be A Pirate”, filmed here in 2010 (also sung by Nick), showcased Rocky Point’s ability to provide stunning locations on land, on the water, & even in the air! “The Pirate’s” acting cast was entirely comprised of residents of Puerto Peñasco & expatriates whose love of this town has led them to make it their home. The talented cast was recruited by the much loved former resident, Kent Cossey who nailed a major role in the video as well. To see some of Ed’s other music videos, go to Ed Waters Music on YouTube.

Thanks to Wayne Corcoran, (Resort and Systems Manager) of Laguna Shores Resort, a major portion of the filming will be done at this beautiful ocean front setting where cast & crew will have an inspiring oasis as their home base. The gala will be held Sunday afternoon at Laguna Shores Resort and participants must be willing to party like crazy and to be captured on film doing just that! Kicking off the entertainment, live music will be provided by RUCA, an incredibly talented singer with a smoky, soulful voice, & Nashville music veteran Jack Howell of www.willodisc.com/#! (who handled the music production of “I Wanna Be A Pirate” & “Countin Down to Sunset”). To check out RUCA go to www.casaruca.com/#!