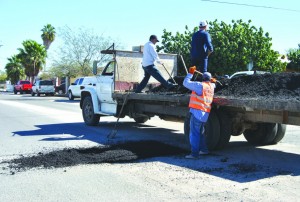 Mayor Gerardo Figueroa Zazueta indicated strong rains from the most recent winter front led to further deterioration of many of the city’s main roadways. This in turn led to the urgent push for pot hole filling efforts.

Seven brigades in all, made up of 48 Public Service employees under the leadership of Jesús Gómez Pulido, began filling pot holes on Feb. 3rd and in just the first day used 16 cubic meters of asphalt.

The Mayor remarked the City has both the material and fuel to prepare asphalt for use on damaged streets, adding that some of the asphalt comes from a donation by Pemex. 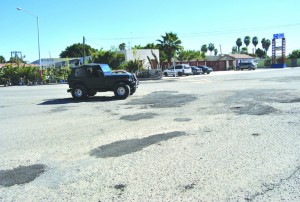 Asking the community to be patient while pot hole filling efforts continue, the Mayor furthered that additional federal resources are being sought for the exclusive goal of addressing pot holes across the municipality of Puerto Peñasco.

Cuauhtémoc Ship of the Mexican Navy to Visit Puerto Peñasco