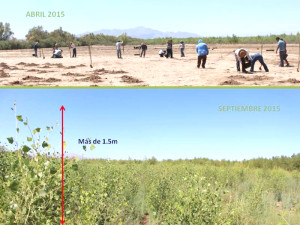 LOS ALGODONES, Mexico – Mexican fieldworker Mario Mendoza, 47, had not seen the waters of the Colorado River flow through the desert of northwestern Mexico since he was a child.

But after the floodgates on a dam near Los Algodones, a town on the Arizona-Mexico border, opened last year, he watched in awe as the dusty channel began to fill with water and start to flow once again toward the Sea of Cortez.

“It was marvelous,” said Mendoza, who was planting native trees on the banks when “the American Nile” began to flow along its course. “It’s like being born again, seeing the river flourish again as it was before.”

The arid American West is in the grip of a historic drought that led California Gov. Jerry Brown to impose mandatory water cuts this month, drained the two largest reservoirs on the Colorado River of more than half their capacity and raised an even chance of water rationing in Arizona, Nevada and Mexico in two years.

But in a rare bit of good news for the river, a push to rejuvenate its parched delta region is hitting its stride after a landmark agreement struck between Mexico and the United States released a surge of water through its lower reaches in March last year, allowing it to reach its outflow for the first time since 1998.

“The aim is to reconnect the river with the sea,” said Francisco Zamora, director of the nonprofit Sonoran Institute’s Colorado River Delta program, which has worked for the past two decades with U.S. and Mexican authorities, nongovernmental organizations and stakeholders on a drive to restore more than 10,000 acres of riparian, or riverbank, habitat and 30,000 acres of estuarine habitat in the delta, which had withered to just a tenth of its original size.

The lifeblood of the U.S. West, the Colorado River rises in the western slopes of the Rocky Mountains and flows for 1,450 miles through a vast and arid watershed spanning seven U.S. and two Mexican states. But pressured by growing demand from urban and agricultural users, it has not reached the sea regularly since 1960.

The binational water pact hammered out in 2012, known as Minute 319, sought to redress that. The first agreement of its kind by neighboring countries to give water back to a river they share, it ordered the release of a single pulse flow of 105,392 acre-feet of water that mimicked natural surge flows in spring.

The floodgates on the Morelos Dam, near Los Algodones, opened in March 2014 as a crowd of a couple of hundred people gathered to watch, and the river began to inch its way along its sandy bed, coaxed by Zamora, who anxiously scraped a channel for it with his foot to help on its 37-mile journey to the sea.

“The water was moving very slowly, and I wasn’t sure [it] was going to make it that far,” he recalled, standing in bright sunshine just south of the Morelos Dam. “It was that feeling that we’ve got to do something to help.”

The pulse – equivalent to about 1 percent of the river’s annual flow – eventually reached the sea nearly eight weeks later, drenching wind-blown seeds from native trees like willows and cottonwoods and enabling environmental regeneration in the newly damp soils of the riverbank.

Alongside its partners on both sides of the border, the Sonoran Institute is working to use every drop of water to restore key pockets of riparian, marsh and estuarine habitat in the delta that naturalist Aldo Leopold explored in 1922 and described as “awesome jungles” and “lovely groves” in his memoir “A Sand County Almanac.”

The organization has some 30 full-time employees cultivating hundreds of thousands of native cottonwood, willow and mesquite trees in a nursery – the only one of its kind in Mexico – to plant at an archipelago of riverside sites providing habitat for more than 300 species of animals and birds, among them the endangered southwestern willow flycatcher and the Yuma clapper rail.

A 130-acre plot cleared of invasive nonnative species and replanted four years ago is now a dense 30-foot tall forest with more than 200,000 cottonwoods and willows. It is already providing habitat for migratory and native birds, some like the yellow-billed cuckoo, not regularly seen in the region for half a century.

“When you see new birds that you haven’t seen before, you know it’s working,” said Guadalupe Fonseca, a Sonoran Institute field coordinator, recalling the first time he saw the cuckoo. He oversees a team of 16 workers preparing to replant a sweep of land within an old meander cut off from the course of the river. “When we plant more cottonwoods and willows, more will come…along with other new birds,” he said.