Considered the most important beach destination along the Sea of Cortez Riviera, Puerto Peñasco is becoming a global tourism and investment center. This is why present Mayor Ernesto “Kiko” Munro organized the forum “Organization of Destination Management” shortly before taking office. 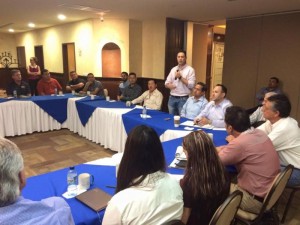 According to a press release, the new Mayor proposed strategies for tourism and urban development of the city, accompanied by Oscar Espinoza Villareal, President of the renowned national think-tank Contorno.

Munro explained that since the June 8th elections, at which time he was elected, he has been working to position Puerto Peñasco as the most important destination for tourism investment in the Northwestern part of the country. This has also focused on sustainable growth and urban development that will provide the quality of life the citizens of Puerto Peñasco need.

During the forum to assess results, members from the Contorno reported that during 2014 Mexico was ranked 22nd globally by the World Tourism Organization (WTO), same period of which saw an economic influx of $16.3 Billion Dollars. This has brought Mexico back into the “top ten” destinations, with the arrival of 24.1 million tourists from abroad.

Based on a study in Puerto Peñasco by Contorno carried out in November of 2014, Espinoza Villareal, who served as Tourism Secretary during the administration of former Mexican President Ernesto Zedillo, stressed it is important that Puerto Peñasco incorporate new niches such as” Congresses and Conventions, Border Tourism, Medical Tourism, Retirement Communities, Golf and Luxury Tourism, Social Tourism, Rural Tourism, And Casinos.

Espinoza Villareal expressed Mexico faces an enormous challenge to grow, and Puerto Peñasco possesses all the characteristics to become a global tourism destination. He recommended that Puerto Peñasco establish a Destination Management Organization (DMO), to guarantee the continuity of projects that will allow key figures to influence urban planning, growth, and services the destination requires.

In addition, the former Regent of Mexico City (94-97), recommended the new DMO develop a long-term strategy for the management and development of the destination for the next 10 years, with the goal of establishing priorities and actions to direct tourism development in Puerto Peñasco, such as creating an icon to represent the identity of the destination.

Finally, he stressed decision making for both tourism and urban development should be done in a coordinated manner with tourism service providers, realtors, business organizations, investors, collegiate groups, and public opinion.