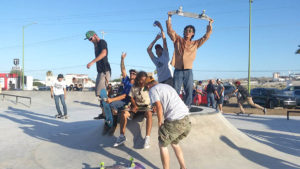 According to the Director of Urban Development, Fausto Soto Lizarraga, the park will have the necessary set up to perform characteristic skate boarding, and will be an added attraction for the city.

“Mayor Kiko Munro has been an enthusiastic promoter of this project,” he said, “because it will not only offer healthy recreation for Peñasquenses, but will attract tourism and boost his vision for putting Peñasco in fashion”.

He said the investment by transnational company amounts to $130,000, while the municipal government granted the land and supplied the workers.

“Right now we’ve advanced 80% in construction,” he explained, “we are finishing up the necessary ramps which includes a volcano icon to honor El Pinacate”

The Municipal Director of Urban Development estimated that this Skate Park will be delivered completed this month (July).

“This project is to benefit all young people in Puerto Peñasco Besides being the only one of its kind in Mexico, and one of only six that exist around the world, built by Levi Strauss, the Pinacate Skate Park opens the possibility of attracting athletes, as well as becoming a potential host site for international events”, he said.