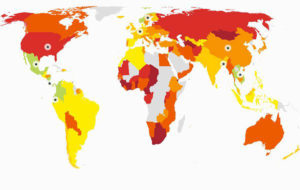 You won’t find many countries happier than Mexico. In fact, there’s just one and that’s Costa Rica, according to the Happy Planet Index.

Mexico has been ranked No. 2 in the world by the index, described by its creator as a measurement of sustainable well-being.

It was well-being, along with life expectancy, where Mexico scored high. Data gathered by the research firm Gallup measured how satisfied citizens felt with life overall, on a scale of one to 10, and gave Mexico 7.3 for well-being, 11th out of 140 countries.

Life expectancy of 76.4 years put Mexico in 39th place in that category.

Another factor was “inequality of outcomes,” which takes into account inequality within a country in terms of how long people live and how happy they feel based on the distribution of life expectancy and well-being data.

Mexico didn’t fare so well here, coming in 60th out of the 140 countries measured.

A fourth factor was ecological footprint, measuring the average impact each resident places on the environment. Mexico placed 77th.

The study, conducted by the think tank New Economics Foundation, points out that well-being in Mexico is higher than in the United States, despite having an economy that is five times smaller, and an ecological footprint that is one-third that of its neighbor.

The index cites the 2012 introduction of universal health coverage and the 2014 soft drink tax as two examples of “what’s working well in Mexico.” It also mentions the growing political attention being given to environmental sustainability, which has been seen in legislating long-term climate targets and steps to conserve forests and protect biodiversity.

But the index points out that economic inequality is “a massive problem”, saying the top 20% of the population earns more than 13 times as much as the bottom 20%. That and high poverty rates among indigenous peoples and human rights violations represent “significant challenges.”

It also mentions the multi-party agreement called the Pact for Mexico, signed in December 2012, as having been an important step for the country’s future.

Colombia, Vanuatu and Vietnam placed third, fourth and fifth while Togo, Luxembourg and Chad were at the bottom of the list.

The New Economics Foundation describes itself as the United Kingdom’s leading think tank promoting social, economic and environmental justice, and says its goal is to transform the economy so it “works for people and the planet.”