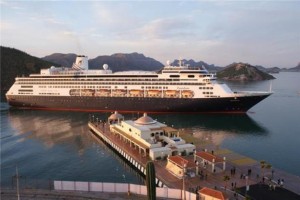 Here is an article that I ran across regarding cruise ships in Mexico. Although it doesn’t specifically mention our city’s future port, it is still very good news overall. Our day is coming and we’ll get our share of the cruisers in the future.
In defense of that statement, in the very recent news was another story about Sonoran Governor Guillermo Padrés reaffirming the fact the our very own home port is coming in the near future. They were talking about it on the radio this morning as well. It seems that it is very close. My own opinion is that they are saving a big announcement to be used for impact prior to the elections in July.  Here is a link to that article:
http://www.uniradionoticias.com/noticias/articulo112765.html. It is in Spanish so if you don’t read Spanish, you may want to copy/paste it into a translator program such ashttp://translate.google.com/.
Here is the article that I was originally referring to:
Article written by: Sean O’Neal  23 March 2012
As reported in the Wall Street Journal this week, Mexico has retained the coveted position of top cruise ship destination in the world! Additionally, there was a 7.1 percent growth in the cruise industry in Mexico. More than 5 million people on 1,800 ships arrived to the Land of the Sun via its picturesque ports. That adds to more than half of a billion dollars to Mexico’s economy in jobs and revenue!
It is absolutely no wonder then that Carnival Cruise Lines (NYSE: CCL) whose company commands around 49% of the global cruise industry, have recommitted to Mexico.
In a huge move and a true boon to both Playa del Carmen real estate and Puerto Aventuras real estate, Carnival Corporation, the British and American company, have just signed a pact to invest $150 million in port infrastructure in Calica, which is 6 miles from Playa del Carmen and just 7 miles north of the quaint seaside community of Puerto Aventuras.
The pact was signed on the beautiful island of Cozumel between Mexico’s Secretary of Tourism, and Gerard Cahill, President and CEO of Carnival, and witnessed by none other than Mexican President Felipe Calderon.
According to Calderon, tourism wages are more than 30 percent higher than the average job in Mexico. And the tourism industry employs more women than any other industry.
President Calderón also emphasized the federal governments ambitious goal of becoming the fifth-most-visited country in the world by 2015.
“For this reason, I congratulate Carnival and I recognize the significance of the decision that Carnival made to invest in our country,” Calderón said.
This article is brought to you by The Sonoran Resorts Sales Group, Jim Ringquist, Director of Sales.