Will You Celebrate Día de los Muertos?
Or, Do You Even Really Know What It Is? 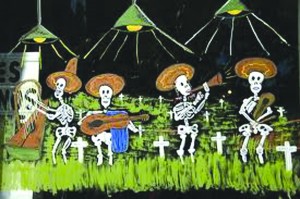 At first glance, the Mexican custom of El Día de los Muertos – the Day of the Dead – may sound much like the U.S. custom of Halloween. After all, the celebration traditionally starts at midnight the night of Oct. 31, and the festivities are abundant in images related to death.

But the customs have different origins, and their attitudes toward death are different: In the typical Halloween festivities, death is something to be feared. But in el día de los muertos, death – or at least the memories of those who have died – is something to be celebrated.

El Día de los Muertos, which continues until Nov. 2, has become one of the biggest holidays in Mexico, and celebrations are becoming more common in areas of the United States with it’s large Hispanic population. Its origins are distinctly Mexican: During the time of the Aztecs, a month long summer celebration was overseen by the goddess Mictecacihuatl, the Lady of the Dead.

After the Aztecs were conquered by Spain and Catholicism became the dominant religion, the customs became intertwined with the Christian commemoration of All Saints’ Day on Nov. 1.
Specifics of the celebration vary with region, but one of the most common customs is the making of elaborate altars to welcome departed spirits home. Vigils are held, and families often go to cemeteries to fix up the graves of their departed relatives. Festivities also frequently include traditional foods such as pan de muerto (bread of the dead), which can conceal a miniature skeleton.

I was fortunate enough to attend the celebration in Michoacan a few years ago and it really was an experience never to be forgotten. The entire population of the small village turned out to celebrate. I think that the thing that has stuck with me the most is the fact that, although the celebration was held in the cemetery, it was very festive and happy. No one cried or talked about how they missed their lost loved ones. Everyone laughed and told stories of the lives of the deceased and the experiences that they had shared together. Many people had prepared the favorite foods and drinks of the departed and they were all very happy to share them with everyone there.