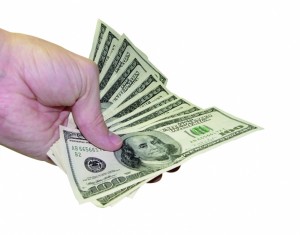 It has been said many times that the natives of Puerto Peñasco are a very gracious people and this is very evident when it comes to receiving a gratuity or propina (pronounced pro-pee-nah). A tip seems to be a welcomed, not an expected, bonus. When I dine out, charter a boat for a Bird Island trip, or get my hair done and leave a tip for the waiter, captain or stylist, my tip is always met with a smile and a thank you. The tip may be more or less of what they expected or they may not have expected it at all. I tip what I think is fair and dependent upon the level of service I received. In the States I feel “pressured” to leave the industry standard whether or not I received good service. I am not a cheapskate. I too work for my money and do not like to give it away just because the person “expects” a certain amount.

Waiters, waitresses and other service workers in the U.S. are paid less and rely on gratuities received to make up a large portion of their weekly take. It is no different here in Puerto Peñasco except that workers are paid far, far, less than the average U.S. worker, work longer hours and more days, and do not receive the “industry standard” gratuity as a general rule. I have been around long enough to see tips that Americans and Mexicans leave – sometimes it is just embarrassing: A restaurant tab of $40 USD and the patron leaves a ten peso tip (less than $1 USD). Granted, it is better than nothing, but ten pesos? You couldn’t afford, say $4 USD? But again, cultural differences and individuality gives us the option to tip or not to tip and to decide how much. Most workers in Rocky Point make so little as a wage and if they received just a few extra dollars a day in gratuity it would go a long way to bettering or maintaining their quality of life.  So, while vacationing in our beautiful beach paradise known as Rocky Point, Mexico please tip your waiter, tip your waitress, tip your boat captain, tip your grocery bagger, tip your stylist, tip the person who pumps your gas, your masseuse, your pedicurist, and your maid. (You get the idea.) It doesn’t have to be a large amount and you don’t have to feel guilty if it’s less than you would have tipped two years ago – it is something to say you value the service you received and you are sharing your hard earned money. I always carry around loose peso change to give to the gas station attendant, or Red Cross or people begging. I don’t much like the begging, but I give them a few pesos now and then. I must admit that the “squeegee boys” drive me nut so I rarely let them wash my windows and if they do so without asking I don’t give them anything (most of the time – some are so irresistibly charming you just have to part with a couple pesos).

Tipping is sometimes a tricky business because you may not know when to tip or how much to tip so I always say ask or find out beforehand. For example if you are going to charter a boat to Bird Island do you tip the captain or not? Has he provided a good service? Did you have a good time? Did he go above and beyond to make sure you were comfortable, safe and having fun? If the answers are yes, then why not give him a gratuity as a way to say thank you. Sometimes it does not work if you ask the person giving the service how much you should tip: Mexican workers usually will not tell you what to tip they will instead tell you it is not necessary or will say whatever you think is fair. They are, for the most part, very shy, conservative and humble. If they have a boss – the owner or manager, ask them what an average tip would be for whatever service you received or leave what you think is fair.

I guess that is my point here…in Mexico I feel more willing to share my hard earned money by way of gratuity or donation because the person receiving the funds is so gracious, friendly and you always get a big smile. They actually like their job serving you and it shows. You don’t have to break the bank, just tip what you can when you can and know that it is very much appreciated.