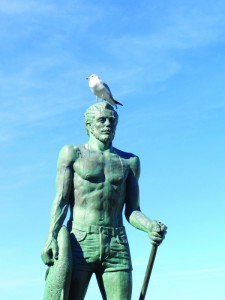 Situated amongst the various curio shops, fish markets and restaurants in the Old Port area is a weathered statue of a fisherman – wearing only shorts and firmly grasping a large fish at his side – and dedicated to the local individuals involved in the commercial fishing business. Judging from his appearance, he also represents more than a pescador.

While stoically withstanding nature’s abrasions, he also free-lances as a perch for weary flying creatures seeking a brief pause from the daily grind. Expressionless and unflinching, he doesn’t wince when white-gooey bird poop, mixed with other aerial excretions, oozes down the forehead onto his bushy eyebrows and muscular shoulders.

Apparently, the avian intestinal concoction prevents male-pattern baldness, but doesn’t help much in growing chest hair. Which is just as well, because if the dude had a shirt to cover his harry chest it’d be heck for his wife to wash out the stains.

Interestingly, the gull standing atop the guy looked suspiciously like the very same one I observed pilfering my tortilla chips and salsa at the Reef, a watering hole about four miles up the coast on Sandy Beach. I can’t say with absolute certainty that it is the same bird, but it sure seems more than coincidental that after snatching my bowl of chips I would soon see him in town fertilizing the statue’s pompadour. After all, what are the odds of two sea gulls looking exactly alike?

In the meantime, like a miniature Colossus of Rhodes, the Old Port statue represents a muted guardian for the people and traditions of Puerto Peñasco’s fishing heritage. And, I suppose, the task also involves standing quietly as birds of every description dump on his head.

He probably should have given a little more thought to that part of the job before he accepted the position. Common sense might have told him that if he is signing-up with an outfit that requires he remain silent and motionless while birds defecate on his head, then in all likelihood there probably isn’t going to be much opportunity for advancement.

Then again, in today’s difficult economic environment he’s fortunate to be working. I just hope he makes enough to pay his health care insurance. That is, if he was one of the lucky ones who managed to log-on to the web site.