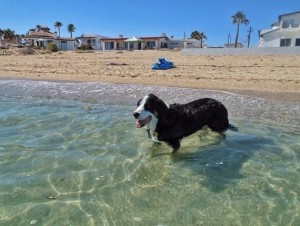 Miki had never been to the ocean before. He was used to car trips, and hotels too. As we drove onto Paseo de la Palma, the curvy road that takes you close to the resorts, I could see his nose twitching as I looked in the rearview mirror. A new smell.

Before even unpacking, we walked down to the beach. Unleashed and wide eyed, Miki took off like a rocket, diving in and out of waves, barking at pelicans, digging hole after hole, until finally a seashell caught his attention. With a look on his face that said he had just figured out the reason he had been put on this earth, he gingerly picked the shell up with his teeth, brought it over to me, and dropped it at my feet. Slowly, not wanting to take his eye off of the shell in case it, I don’t know, ran off, he raised his head and gave me a look that said “Do it”. To be sure that I got the message, he began to bark. Roughly translated it went “do it, do it, do it, do it, do it, do it, do it, do it…” And I did.

How many times I threw the shell and he ran flat out to scoop it up and drop it back at my feet I can’t begin to say. We finally had to stop because it was getting dark. Running a little slower but with no less enthusiasm, I knew Miki would keep it up way past the point of sanity. But part of the reason for going off the grid and taking a Mexican vacation is to let yourself be a little crazy. It’s good for your mental health, and your dog’s too.

Dogs are a regular part of the beach scene in Rocky Point. Weather on leash for a long sunrise walk, or paddling out to get that tennis ball, dogs and their owners love and look forward to the time they share here.

Crossing the International border with a dog or cat (the only two animals that are considered pets by Mexican border authorities, so don’t even think of bringing the Python!) is straight forward. Proof of rabies vaccination is what is officially required. The same document proves that ‘Fluffy’ is yours when you come back through U.S. Customs. A days worth of dog or cat food is all that is allowed to be brought into Mexico, and I do know that big bags of the stuff have not been allowed to cross. But even the convenience stores here sell what you need for a weekend or longer.

They say a tired dog is a well behaved dog. His black and white fur shinier than ever (must be the salt water?), Miki made no big show of inspecting the condo that would be his home for the next few days. A little food, a lot of water, and then ‘excuse me if I don’t watch T.V. with you guys’, I’m going to bed. A beach towel on the patio became the perfect place to sleep it off to the sound of the waves below. Once in a while his feet would shuffle as he dreamed doggie dreams of waves, shells, and freedom.

When reserving your stay in Rocky Point, check with your reservations company for pet friendly options. For example, Seaside Reservations has them listed all on one page at http://www.seasidemexico.com/pet-friendly/