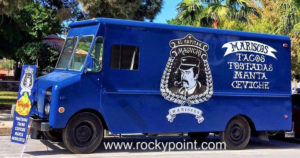 Have you seen the large box van parked by Shrimp Park (Plaza Camarón)? Painted navy blue, it has the look a classic food truck, and that’s what it is. Trending in the U.S. right now is an appreciate for the humble food truck, offering up everything from hot dogs to the most exotic of international cuisines. Offering original takes on classic seafood standards is Capitan Maguchi’s.

Of course Rocky Point is a town full of street food, like all of Mexico. Seafood Campechana, Tacos al Vapor, densely spiced Birria stew, and the familiar Sonoran hot dogs can be found dotting street corners at all hours of the day or night.

What makes Capitan Maguchi’s stand apart is it’s original take on seafood in a ‘seafood’ town. Well-loved Shrimp tacos get a spicy make over, by being breaded with Japanese Panko, Mediterranean Aioli (garlic and olive and parsley), and warmed by a chile dark soy sauce mix, all served on double corn tortillas.

There is also a tostada of fresh tuna piled high and on a fried tortilla with more spicy soy, avocado and cucumber. A very Asian Fusion recipe.

Tostadas La Negra are made with mango and aguachile of shrimp and Lenguado. Aguachile is along the lines of ceviche in the way that it is prepared. The seafood marinates in a lot of lime and some salt which, rather than cooking the food, sort of cures it. It doesn’t get much fresher, or more Mexican than that.

You will also find breaded fish tacos, tacos de manta, as well as homemade cooling Jamaica to wash it down with. Jamaica’s deep red flowers, more commonly known in English as Hibiscus, make a citrusy and sweet drink that balances the dense flavors of the food, and is super refreshing on a hot Summer day. There is also Coca Cola for the traditionalist.

El Capitan Maguchi, named after a founding fishing boat captain from Peñasco’s past, can be found parked most days at the curb by the cities main Shrimp Park, just across from City Hall on Fremont Blvd.