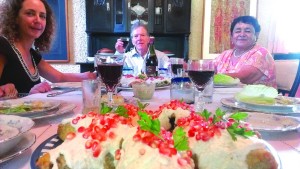 September signals the end of the summer, just a few more weeks and temperatures will cool down, soon weather will be great and the best sunsets of the year will be here to greet us every afternoon. You will also notice this September, while you drive around town that there are a lot of Mexican flags and red, green and white decorations all around, this is because September 16th is Mexican Independence Day. Therefore September is the month of the Country in Mexico, on September 15th the whole country celebrates just before midnight the independence from Spain with a giant family party, fireworks, food and lots of screaming “Viva Mexico” by the Mexican President, the Mayor of each town and everyone who attends the party in every plaza of each town.

Throughout September many restaurants will have Mexican food specials.

The Traditional dish of September is called “Chiles en Nogada” it’s not only exquisite but also beautiful and sports the colors of the Mexican flag with the green poblano pepper, white creamy sauce and red pomegranate seeds that garnish it, this dish is purportedly one of the most representative, beautiful and delicious of the Mexican food repertoire. History has it that it was created in 1821 year that Agustin Iturbide signed the treaty of Independence, in which Spain recognized the Independence of Mexico. It is said that the Agustinian nuns of Puebla knew he was coming to their city and a glorious celebration was planned, it was the month of August when they harvest walnuts and pomegranates so they decided, after much thought, to create for the occasion a dish with the colors of the Tricolored army. The nuns roasted some Poblano peppers, stuffed them in delicious ground pork stuffing that includes fruits like apples, pears and plantain bananas, pine nuts, onion, garlic, tomatoes and several spices and then whisked some eggs coated the peppers and fried them in this fluffy egg batter, to top them off the nuns prepared a sauce to cover them that is made of a base of just harvested walnuts, fresh cheese and a bit of sugar, all of it stone ground together and then added a bit of milk and sweet wine, the sauce being not too thick or too thin, just perfect; this sauce is called Nogada and that is where the name of the dish came from. The last artistic touch is the pomegranate and parsley garnish that together with the white sauce gives this delicacy the same colors of the Mexican flag.

This is just one of the stories of How the Chiles en Nogada came to be, and whether or not to use the egg batter is also controversial, there are other stories and other ways to make the stuffing, many times including ground beef, but all agree that this is just to be served in July, August and September when the walnuts are just harvested and still fresh for the most authentic flavor. This is a dish with a taste of history.

Another traditional Mexican food, is Mole, this one can be found all year round.

The origin of the word Mole is Pre-Hispanic coming from the Náhualt Moli or Mulli, referring to a sauce, even though the word is of Náhuatl origin the Mole as we know it has evolved from the Pre-Hispanic sauce to ingredients brought in by the Spanish conquerors, spices from Indonesia and other regions of the world making it a sauce that is the result of a slow culinary process starting before the Spanish conquest, enriched through the time of the Spanish colony, receiving Asian and European elements.

Mole is one of the most representative dishes of the Mexican cuisine, it is a very sophisticated sauce particularly used for special occasions because it’s preparation is very time consuming and the list of ingredients needed to create it is huge. It is mostly a mixture of a big variety of chilies, many spices, some seeds such as sesame and pumpkin seeds and chocolate, making a sauce that varies in color from reddish to black depending on the kind of Mole; it can have spicy sweet taste that varies greatly from region to region. The Mole from the state of Puebla or Mole Poblano is one of the most well-known and famous moles, usually accompanied with chicken, pork or beef. For most foreigners the taste of the mole is a bit shocking since it’s unlike any other sauce and that is why they say you have to acquire the enjoyment of this very particular dish. For seasoned epicureans however this is a dish not to miss in a visit to Mexico, particularly the southern areas. Another very recognized Mole is the savory sweet Black Mole (Mole Negro) from the State of Oaxaca, which is just one of the 7 kinds of Moles found in the state of Oaxaca. Whether it’s a wedding, birthday, anniversary etc. Most Mexican celebrations will include a dish made with Mole.

Be Adventurous and try one of these Mexican dishes during this month of September and don’t forget to watch one of the fabulous Rocky Point sunsets this fall.

See you at the beach!