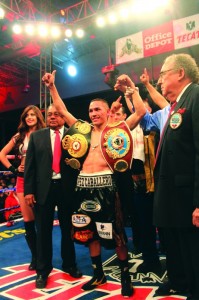 The Puerto Peñasco Convention Center, filled to capacity, was the stage for the boxing event in which “Gallo” Estrada fought tremendously against Mepranum who valiantly endured the powerful punches of Estrada before thousands of fans.

Mepranum did not want to come out for the tenth round, though he put up a great fight, lasting through a variety of punches launched by the Peñasco boxer who, with both fists, was able to chip away at the Filipino’s condition.

It was then when the official announcer called the bout for Juan Francisco “Gallo” Estrada, who quickly received a standing ovation from the crowd, thereby fulfilling one of his strongest dreams in holding onto his championship titles in the town where he was born – Puerto Peñasco.

El “Gallo” Estrada demonstrated his power throughout the fight, once again clearly illustrating his tremendous preparation following months of absence. His condition allowed him to return in earnest to what, undoubtedly, is a promising future in the ring and one in which he will continue reaping rewards and raising up the name of Puerto Peñasco.

“I am excited with having fulfilled another of my life’s dreams. Thank you to all my people in Puerto Peñasco for this night; I gave it all in the ring and it was a great fight for my public, thank you all!” expressed the World Champion.

At the end of the boxing event, Puerto Peñasco Mayor Gerardo Figueroa Zazueta congratulated El “Gallo” Estrada for his grand triumph, but above all for his professionalism and for giving it his all in this fight.

“It’s an honor having a boxer of international caliber from Puerto Peñasco, who has fulfilled his promise of holding onto his titles on this night, which will be unforgettable for all and I am sure there will be many more. Congratulations “Gallito,” exclaimed the Mayor.

During the other main fight of the night, Sonoran Hernán “Tyson” Márquez returned to victory by beating Filipino Mark Apolinario by points; this came after Márquez fell to Giovanni Segura of Guerrero just last September.

Saturday night, April 26th, was an unforgettable night for the community of Puerto Peñasco, as well as for boxing fans, in watching El “Gallito” Estrada defend his championship belts in front of those who saw him become a professional boxer.