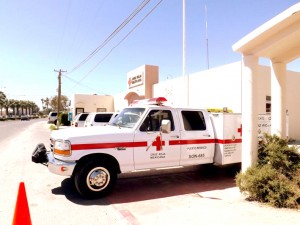 The local Red Cross of Puerto Peñasco has provided more than 5,000 forms of service to the community during 2015, whether consultations or medical attention, and collected over 650,000 pesos from diverse fundraising activities throughout the year, indicated Board President Julio Valenzuela during a recent report of the institution’s activities this year.

To help meet this need, Mayor Kiko Munro announced the City Administration has committed to provide the local Red Cross with 1200 liters of diesel/gasoline monthly. This is in addition to providing 9 salaries through the City for Red Cross personnel.

During the past administration the Red Cross was also given a piece of land to raffle off as a fundraising effort in helping to cover the needs of the institution. The raffle is set to take place on Friday, February 26th and tickets are available at the Red Cross located on Blvd. Fremont.

A Sanctuary in the Middle of a Small Desert Town…