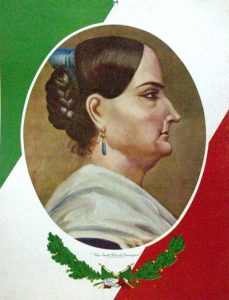 Josefa Ortiz de Domínguez (September 8, 1768 – March 2, 1829) was a conspirator and supporter of the Mexican War of Independence, who fought for independence against Spain, in the early 19th century. She is frequently referred to as “La Corregidora”. Ortiz de Domínguez was the daughter of Don Juan José Ortiz; a captain of “Los Morados” regiment, and Doña Manuela Girón in Valladolid (present-day Morelia). Her father was killed in a battle early in her infancy and her mother died soon after. Maria Sotero Ortiz, Josefa’s sister, took care of her upbringing and managed to secure a place for her in the prestigious Colegio de las Vizcaínas in 1789. She married Miguel Domínguez, a frequent visitor to the college, in 1791. In 1802, Miguel Domínguez was appointed by the Viceroy of New Spain to the office of “Corregidor” (a magistrate) in the city of Querétaro. During that period, Ortiz de Domínguez took care of household chores and the education of their 14 children.
Ortiz de Domínguez developed an early sympathy for the Amerindian, mestizo and the criollo community who were oppressed by the Spanish colonial government. Amerindian people were oppressed; mestizos and criollos were often seen as second-class citizens and were relegated to secondary roles in the administration of the colony. This obviously created discontent among many criollos who soon started to organize secret and literary societies where works of the Enlightenment, banned by the Roman Catholic Church, were discussed. Ortiz de Domínguez herself attended some of the early meetings and eventually convinced her husband to organize a number of political meetings in their house. The meetings, attended by educated figures including Miguel Hidalgo y Costilla and Ignacio Allende, quickly turned to revolutionary issues.
The overthrow of King Ferdinand VII of Spain, as a result of the Peninsular War in Spain, suddenly increased the prospect of independence for the Spanish colonies in the Americas. The meetings in Ortiz de Domínguez’s house became the official location of the revolutionary conspiracy, and much of the insurgent planning was carried out there, including gathering weapons and supplies and storing them in various houses. The beginning of the revolution was planned for December 8, 1810. However, on September 13, the conspirators were betrayed by a supporter, who informed the Spanish colonial authorities about rebel activities in Querétaro. Unaware of his wife’s allegiance, Miguel Domínguez was asked to conduct a house search in the town in order to apprehend the rebel leaders. He imprisoned Ortiz de Domínguez in her room to prevent her from exchanging information with her fellow conspirators.
The rebels had a large following, and Ortiz de Domínguez eventually managed to get a warning out through the town mayor, Don Ignacio Pérez. The news allowed the leaders of the conspiracy to abandon the town and prompted Miguel Hidalgo y Costilla to declare war against the Spanish colonial authorities, in which he made a speech to his followers known as Grito de Dolores (“Cry of Dolores”), in the early morning of September 16, an event that signaled the start of the Mexican War of Independence.
Eventually, the role of Ortiz de Domínguez and her husband played in the conspiracy was uncovered. They were imprisoned separately. She was sent to the monastery of Santa Clara, in Querétaro, and then to Mexico City to stand trial. Despite her husband’s efforts as her lawyer, she was found guilty and placed in seclusion in the monastery of Santa Teresa. Due to her rebellious character, she was soon transferred to the convent of Santa Catalina de Sena. Ortiz de Domínguez was released in 1817, under an oath that she would refrain from supporting the rebellion. After the war of independence in 1822, Mexican Emperor Agustín de Iturbide, offered Ortiz de Domínguez the role of lady-in-waiting for his wife, Ana Duarte de Iturbide. However, Ortiz de Domínguez believed the establishment of a Mexican Empire, instead of a Republic, was against the ideals she had fought for during the revolutionary period, and she refused the honor. In 1823, she was designated a “woman of honor” by the empress, a tribute which she also denounced.
During the late years of her life, Ortiz de Domínguez was involved with several radical political groups. She always refused any reward from her involvement in the independence movement, arguing that she was only doing her duty as a patriot. Ortiz de Domínguez died in 1829, in Mexico City. She was originally buried in the convent of Santa Catalina de Sena, but later her remains were moved to Querétaro. The government of Querétaro declared her “Benemérita del Estado”.
Legacy
Ortiz de Domínguez is a national hero of Mexico. In her honour, she has appeared on coins and postage stamps, while the La Corregidora football stadium in Querétaro, and the municipality of Corregidora are named after her.
(In Rocky Point, Josefa Ortiz de Dominguez is the north/south street which connects Blvd. Fremont with Blvd. Benito Juarez (Hwy 8). It is sometimes called simply, the big boulevard.)