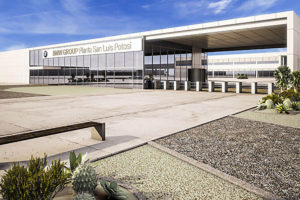 The German auto maker will build the next-generation 3-series sedan at the new factory, with annual production predicted to total 150,000 cars.

The model is one of the top-selling luxury cars in the U.S. and represents 30% of BMW’s revenues. The company sold 444,000 3-series models last year.

The US $1-billion plant will begin operating in 2019, employing 1,500 people directly, said company executive Oliver Zipse at a press conference.

He recalled that BMW began looking for a location to expand its North American operations in 2011, deciding on San Luis Potosí over Aguascalientes and Hidalgo for the “logistical triangle” it forms with Mexico City, Monterrey and Guadalajara.

The 300-hectare site is big enough for expansion of the plant to produce an additional model, said Zipse.

The land was turned over to the company by the state government this week after it installed electricity, water, natural gas, a railway spur and temporary offices. One report said the incentives granted BMW totaled US $236 million and include state and federal tax exemptions for 10 years.

The factory will have its own body, paint and assembly shops but engines and transmissions will be made in Germany.

Zipse said the plant’s production system will be a leader in productivity and sustainability. Most of its electricity will be generated by a solar-powered system on the site, and its water consumption per vehicle produced will be the lowest in the world.

The paint shop will use reconditioned and recycled water, making it the first of BMW’s 31 plants to produce no wastewater.

Low labor costs and access to other markets are Mexico’s chief attractions for auto makers. One advantage for BMW will be to save the 10% duty on vehicles it exports to Europe from its U.S. plant in Spartanburg, South Carolina, by manufacturing in Mexico.

Mayor Thanks Community for Solidarity Toward Local Family Following Fire