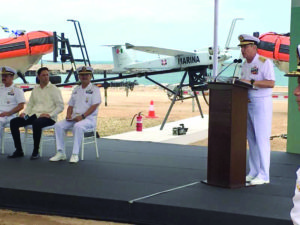 The mayor accompanied Secretary of the Navy (SEMAR), Admiral Vidal Francisco Soberón Sanz, and Secretary of the Environment and Natural Resources (SEMARNAT), Rafael Pacchiano Alamán in the symbolic presentation of the Arcturus T-20 System, which will strengthen monitoring efforts to help protect both the Totoaba and Vaquita Marina species.

“Today we bear witness to a very positive step in the conservation of species that are endemic to the Upper Gulf of California,” stressed Kiko Munro, “which highlights the coordination between civil and military authorities in working for the common good.”

SEMARNAT Secretary Pacchiano Alamán, expressed appreciation for the support of SEMAR in the comprehensive care for the country’s natural resources, which is one of the main priorities of the Federal Government, with a particular interest in protecting the endangered Vaquita Marina and Totoaba in the Sea of Cortez.

Navy Secretary, Vidal Francisco Soberón, acknowledged there is still much to be done in the area of conservation, though necessary steps are being taken on urgent work in safeguarding the natural environment.

“The existing legal framework must be strengthened,” he explained, “in order to implement stronger sanctions on the illegal exploit of natural resources, thereby inhibiting illegal practices that impact species such as the Vaquita Marina.”

The Arcturus T-20 unmanned aircraft surveillance system, explained the Navy Secretary, “aims to contribute to the recovery of the Vaquita Marina population while carrying out activities against the illegal fishing of Totoaba, as well as assisting with the development and well-being of coastal communities in the Upper Gulf of California, among these San Felipe, Baja California, as well as the Gulf of Santa Clara and Puerto Peñasco in Sonora.”