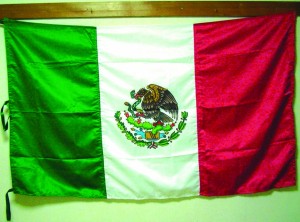 There is a long history associated with the flags of Mexico. Starting with Columbus and after him the Conquistadors, the Spanish Royal Standard flag was used to represent the King of Spain. About 1785 Charles III chose the Spanish War and Merchant Flag to represent the colonies as the naval and coastal fortification flag until Spain recognized Mexico’s independence in 1821.
You might say the first true Mexican flag was the one carried by Padre Miguel Hidalgo on September 16, 1810 during the Grito de Dolores, the Shout of Suffering. That day marked the beginning of the War of Independence from Spain (1810-1821). This flag is called the Standard of the Virgin of Guadalupe. It depicts what is believed to be the miraculous impression that appeared on the cloak worn by Juan Diego during a Marion visitation of the Virgin Mary between December 9 and December 12, 1531, in Tepeyec, the location of present day México City.
At the end of the War of Independence, from 1821 to 1823, the first Official National Flag was adopted. The design is very similar to the flag that is used today: vertical tricolor sections of green, white, and red. The green, at that time, stood for independence, the white for supremacy of the Catholic faith, and the red for the equality of the Creole and the Spanish-born classes of Mexico. In the center white panel is the Coat of Arms of a crowned eagle standing on a prickly pear plant growing from out of a stone or rock in the middle of a lake. The coat of arms represents an Aztec legend. The Aztecs, also known by the name of Mexica, pronounced mehshee-ka, were a nomadic tribe. In a dream the leader was told by Huitzilopochtli, the god of war, that they were to find a permanent settlement when they found an eagle resting on a prickly pear cactus holding a snake. The eagle was found in a swampy area in the center of three lakes where they built Tenochtitlan, now Mexico City.
At the same time, between 1821 and circa 1824 there was also a popular flag called The Flag of the Three Guarantees. It was adopted by Iturbide who made himself Emperor of Mexico. The flag had diagonal sections of white at the bottom, green in the middle and red at the top, with a crown in the center with the words, Religion, Independencia Y Union written in a circle around the crown. The flag also had one 6 pointed star in each of the colored sections.
Between 1823 and 1863 the official flag had the crown removed from the eagle and a snake was added to its talons. A branch of oak and branches of laurel were added to the coat of arms in a semicircle joined in the middle. The next change to the flag was between 1864 and 1867. Napoleon III invaded Mexico and set Maximilian up as the puppet Emperor. A new design was adopted by Maximilian. The same tri-colors were used with a crowned eagle in each of the outside corners and a coat of arms similar to the French coat of arms but with an eagle in the center enveloped by a crown. It resembled the French coat of arms but incorporated some of the Mexican symbols as well.
After Maximilian was overthrown by Benito Juarez, the previous flag of Mexico was used again until 1916, when it was changed once again by turning the eagle from front-facing to side-facing. This version is now the current Mexican National Flag and was officially adopted in 1968.
The symbolism of the three colors has changed since 1821’s original meanings. Benito Juarez changed the representation of the colors when he was President (1858 to 1872). Today, green stands for hope, white for unity, and red for the blood of the national heroes.