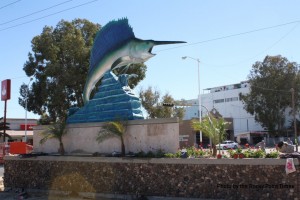 Rescuing part of Puerto Peñasco’s roots, while presenting both residents and visitors with reminders of the city’s origins, is the goal behind building a “Fish Monument” at the intersection of Calle 13 and Blvd. Benito Juárez.

The figure, which has been placed on the structure, as part of work to improve and beautify this important road leading to the city’s main hotel zones, will be that of a marlin measuring 6 meters long (nearly 20 feet). The fiberglass marlin was built by the local company PROFIBRA.

“This is a project both for the people of Puerto Peñasco and for our visitors,” explains Mayor Gerardo Figueroa Zazueta. “We were lacking a monument to reflect our roots, so that people may know about the origins of the port.”

The Monumento al Pescado, according to information provided by the Office of Public Projects, is set to be inaugurated within the next three weeks. This will also mark the reopening of Calle 13.

The marlin is in the center of the concrete block structure at the entrance to Calle 13. The structure itself is covered with rock and pine cantera; ironwork, landscaping and lighting are also part of the project that has been estimated to run about 500,000 pesos.

With completion of this monument, this will bring the number of monuments heralding the roots of Puerto Peñasco to four, joining the Estatua del Pescador and monument to José the Fisherman in the malecón, and the Shrimp Monument located at Plaza del Camarón.

From Sailfish to Marlin 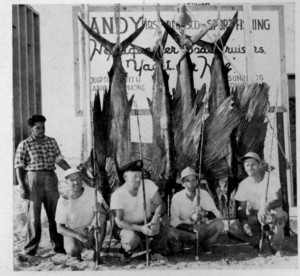 During the 50s, a first emblematic monument of Puerto Peñasco was built in the form of a sailfish.

In learning about the new Monumento al Pescado construction, many Puerto Peñasco natives and long-time residents remember the sailfish that once stood at the entrance to what is now Calle 13, which was actually a promotional sign for the Playa Hermosa Hotel.

So recalls Enrique Rodriguez, General Manager of FMI Rentals and lifelong Puerto Peñasco resident (who for a time while growing up lived just blocks from the sailfish sign).

Photo: Used with permission from collection of Guillermo Munro Palacio

“It was a Puerto Peñasco icon because at the time Playa Hermosa was one of the best hotels on the beach. Everyone who visited at that time would say, ‘Go along the street, turn right at the fish and the hotel is at the end,’ it was like a reference point,” Rodriguez explained during a recent impromptu interview.

Rodriguez, along with Las Gaviotas manager Alberto Gallardo and shipbuilder Antonio Bellot, detailed the sailfish monument was well-built and consisted of a stone base with wooden posts, and a wooden sailfish pointing in the direction of the hotel.

“I think it was a good reference point, as well as an icon for Puerto Peñasco,” reiterated Rodríguez, “and it is worth rescuing these values; we can agree on that.”

Similarly, Gallardo remembered the sailfish figure built over 50 years ago was quite famous at the time though disappeared when Calle 13 was first paved in the late 70s.

“The monument was there up until they paved Calle 13 in ’78 or ’79,” he explained, “The owner of Playa Hermosa used to receive many people who he would take out fishing for sailfish, of which there were many at the time. That “little” fish was quite famous.”