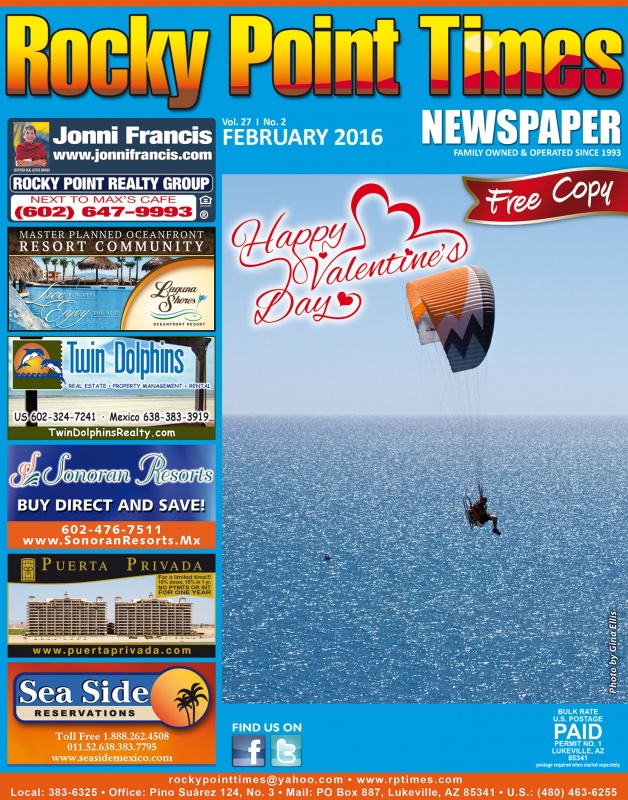 Looks like we’ve made it into 2016. I hope all of you are having a great start to the New Year. Not a whole lot has changed since last month except that there is currently some work being done on our Home Port. I spent the New Year in Cabo San Lucas and snapped this photo while enjoying an ice cold beverage at The Office. See the cruise ship? That will be Puerto Peñasco very soon. It’s hard to believe, but easy to imagine that I will be snapping a similar photo from Sandy Beach one day. I know it will be a bit different because we will be a Home Port, where the ships arrive, depart and dock, as opposed to a destination/stop like Cabo, but that just means tourists will have more time to explore and enjoy Rocky Point. 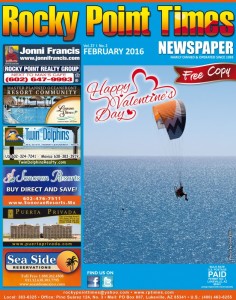 I very much enjoyed Nancy Phelan’s article about the Animal Adoption Center last month. It is nice to remember how it all got started and realize just how much work she has put into saving animals. I know for sure she can definitely write a book about her experiences! So this month I’ve decided to copy her idea and give you all a recap of how the Rocky Point Times Newspaper came to be…

I won’t go too far back, but you must first know a few facts about my folks. My Mother, Sandra O’Hare, worked for GTDC (General Telephone Directory Company) in Los Alamitos, CA doing telephone sales. GTDC was a yellow/white pages directory. (Yes, those giant things we used as booster seats when we were kids.) She won all kinds of awards and rocked the telephone sales department. Meanwhile, my Dad (actually my step-dad since I was 10) was honing his people skills with the Teamsters in Los Angeles, California. After he got tired of cracking heads (just kidding) he moved to Lake Havasu City, Arizona and opened up the Desert Sport Shop which sold sporting equipment. My Mother still living in Southern California and Tom living in Arizona met through a mutual friend in 1978. The rest is pretty much history except that it took them like 14 years to actually get married.

My Mom wasted no time and hauled ass to LHC where my brother and I followed in 1979. I was just a youngin’ back then so I wasn’t in on the conversations that took them from owning a sports shop to starting an independent yellow page directory company that would come to serve Prescott, Laughlin, Bullhead City, Lake Havasu City, Parker, Needles, Kingman and I’m sure I’m missing an area or two. It was called The Local Business Directory. I think Kmart had just moved into Havasu and was selling sports equipment, which made the Desert Sport Shop lose a lot of business. And with my Mom’s background in yellow pages I think they thought they could do a better job at putting out a phone directory than Citizens Utilities. So, they went head to head with a very large telephone directory and that kept us in soup and bananas for the next 20-some years. To get from A to B you would have to get inside of my parents heads’ – a lot of their decisions just came about. They’ve always been risk takers and all-or-nothing, go for broke kinda people. Well more my Dad than my Mom. So from the age of 10 I was forced into child labor and gladly brought my friends along with me. We hand delivered phone books (for every area) which meant we had pallets and pallets of phone books (at our house in Havasu or a motel wherever we were) which we had to put in a plastic bag and then secure with a rubber band so we could then chuck them out of the back of a truck in 120-degree heat. Lots of fun! We did everything from collecting names to laying the phone books out. I even learned to typeset on the very first AM Varityper. A computer of sorts that you had to program your copy into one line at a time. No screen, nothing! You didn’t know you made a mistake until you developed the paper (in chemicals). Oh boy those were the days.

In 1987 or so, my Mom and Tom decided to sell The Local Business Directory business to a firm out of the mid-west. They said they were ready to retire, but were nowhere near retirement age. After the sale my Mom stayed on a couple years and helped out the new firm. Soon thereafter the folks got into opening discount stores where they would buy truckloads of merchandise at crazy low prices. That was fun for a while as well, but they eventually closed the stores down and were seriously going to retire.

That brings us to about 1990 when some friends came to Rocky Point and invited my Mom and Tom down for a visit. At the time they had a house in Lake Havasu City, but really were retired and traveled around in their motorhome a bit. So, down they come in their motorhome to check things out. Just a vacation, ya know. Jump forward to 2016 and The Rocky Point Times is still here. I will save the 1992 to present story for the next Editorial but let me leave you with a few photos from back in the day. A lot of you will remember some of these shots.

Costa Brava used to be at the end of the Malecon across from the Viña del Mar – across from where The Satisfied Frog is now. They had a terrible gas explosion that we heard all over town. It leveled the building and badly injured quite a few people.

Remember The Happy Frog in El Mirador on Matamoros. Too bad you can’t see that the road is still dirt. Boy that was a great place to eat! I think this photo is probably around 1996.

Mr. Amigo, when it was on Blvd. Fremont before it became the Black Dog and then the Casino. Now there is a Sr. Amigo on the Malecon in Old Port. This photo was around 1996 as well.

And finally the Baja Cantina being constructed in February 1998.

And this month we have the Super Bowl and Valentine’s Day so be sure to make your reservations at your favorite Rocky Point haunt. Looking forward to the weather getting a little warmer next month and seeing more of you!! 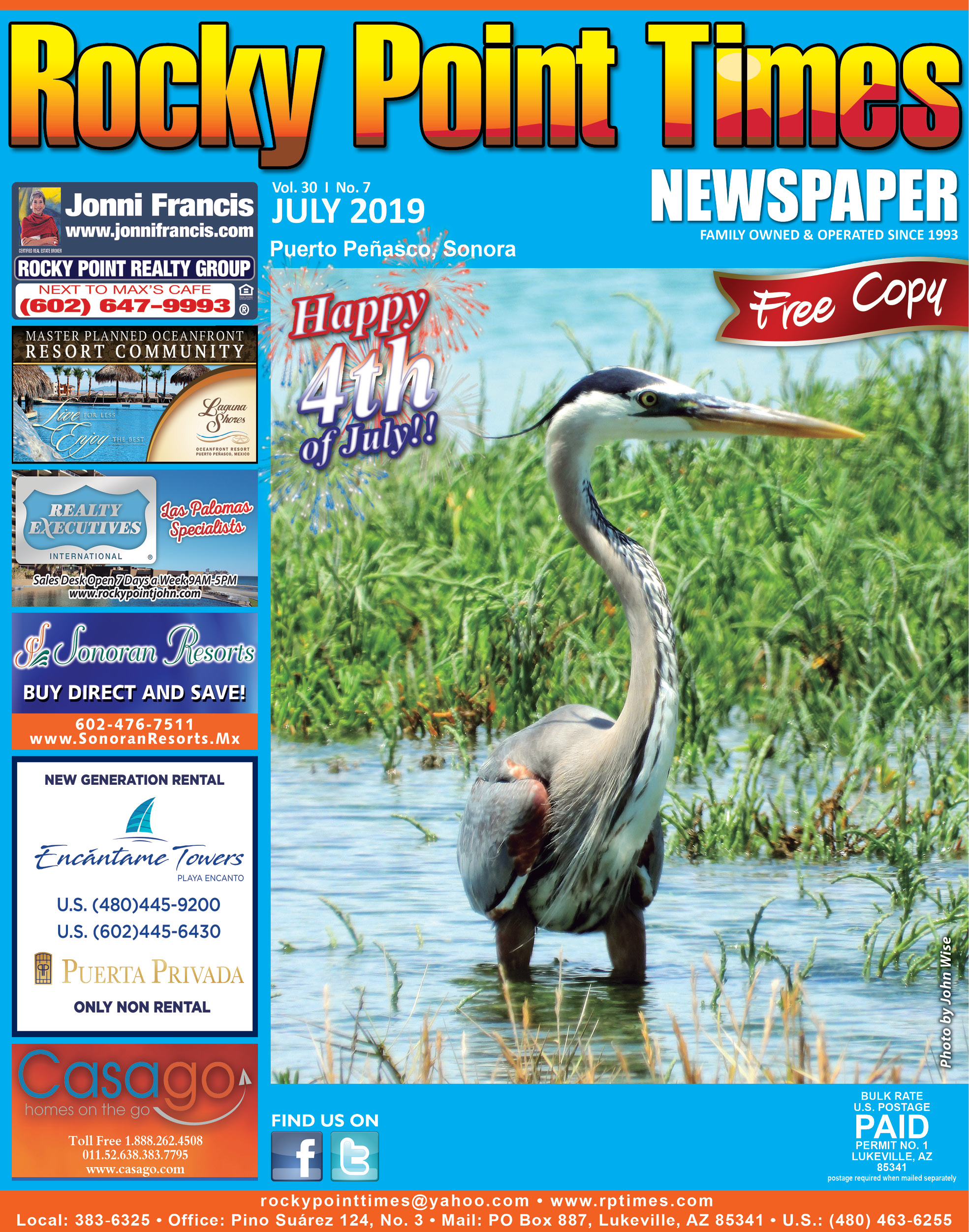 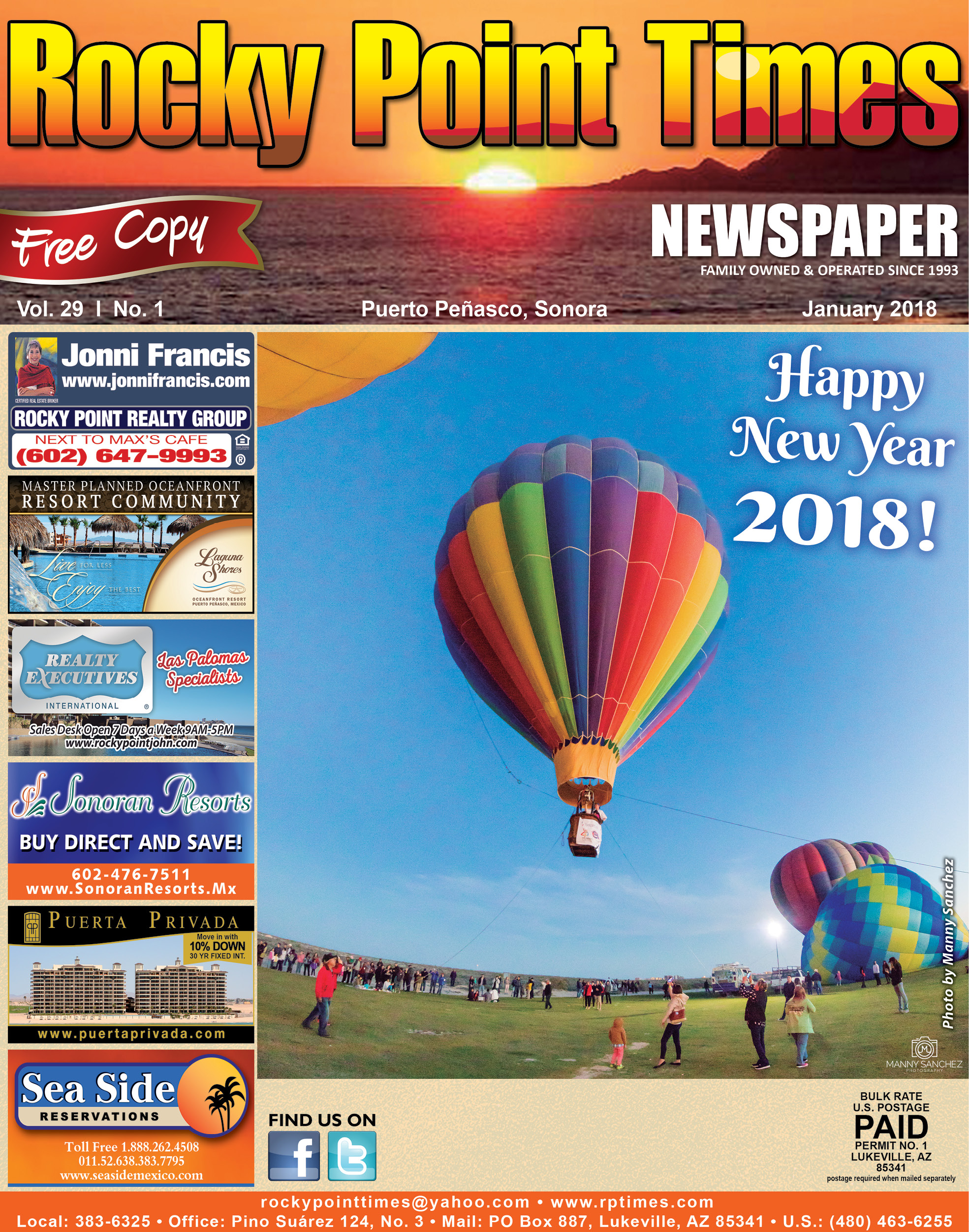