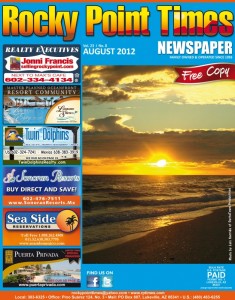 In the July editorial, I wrote about the closing of the Sonoyta bridge, which crosses Hwy 2 and is the main route traveling north from Rocky Point to the U.S. or else to San Luis, Mexicali or the Baja. The main bridge is being rebuilt and from what I hear, will not be completed for about six months. The alternate rouse is a few city blocks away from the bridge, (detour signs are well posted) and crosses over what is a normally a dry wash. The only other highway from the mainland to the Baja, is the new coastal highway from Rocky Point to San Luis. AS OF OUR AUGUST DEADLINE THE DETOUR IS CLEAR & OPEN. Back to information on the ‘detour’ (wash road)…From what was told to me recently by a local Ajo historian, Bryan Blow who is the owner of the Dish TV store on the main drag of Ajo, there is a basin northeast of Sonoyta and many years ago a dam was built there. The basin is about ¾ to 1 mile in size and, when necessary, water is released from the dam up north (in Arizona) into the wash. During the month of July, Arizona monsoon season, there have been several hard rain storms and the road through the wash in Sonoyta has been literally washed out, causing a lot of frustration for all travelers using this route. I have heard stories about people having to wait from two to ten hours when the wash is running with water. We know NOT to cross any wash which is running with water, right? My last trip down to Rocky Point, I had to wait an hour and a half in traffic to cross, as the wash was running so hard across the road, and it had not rained in the area for the past four days. At the time, I did not know about the basin (nor the dam) so apparently they were releasing water from the dam. We are getting many inquires about wait time and road conditions and it changes almost day to day or hour by hour. You can call the following for their latest update: Lukeville Port of Entry (520) 387-5671, or Sonoyta police (011-52-651) 512-0192. Under normal weather the wash road has always been ‘our secret’ (not anymore), and a good way to go north or south from/to Hwy 2, with very little down time. Now that they are installing the new big drain pipes in the wash, there have been no problems with the crossing. Before I forget, while we are kind of on the subject. Sandy asked me to tell you about this website for Rocky Point weather. She said, It’s pretty cool”. Go to www.wundergroundweather Click on forecast maps, and type in Puerto Peñasco.
I mentioned Bryan’s name earlier in this Editorial, and that he is a Dish TV dealer in Ajo. He is also a frequent visitor to Rocky Point. I had been having a problem with my dish system for quite a long time and I told him about it over the phone. He said, “I’m coming down Saturday, I’ll stop by.” Before Bryan came to the ‘Ranchito’, I mentioned to a couple of my friend’s that the Dish TV man was coming to my house. They both said that they would like to stop by, as they had some questions of their own. On Saturday Bryan fixed my T.V. (Pilot error, I was pushing the wrong buttons on the remote controls.) He told one friend how to adjust his dish, and he sold components to another to get HD. I got to thinking, maybe I’m not the only living dinosaur who knows absolutely nothing about the new technologies and all the gadgets on the HDTV market today. So, I invited Bryan to come to the Rocky Point Times Newspaper office on Friday, August 24th, between 2-4PM. So, mark your calendars and stop by. If anyone needs info about Dish TV or simply has questions, please come and talk to Bryan. You can call our office at 383-6325 if you are interested, or have never been to our offices in Rocky Point and need directions.
Institutional Revolutionary Party (PRI) will be stepping into the top job in Mexico in September when the change of power occurs. In Rocky Point, Professor Gerardo Figueroa Zazueta was chosen by voters as the next mayor of Puerto Peñasco. “Profe” Figueroa, as he is affectionately called, has a long history of public service, most recently marked by three years as local Representative. Mayor Figueroa Zazueta will take office at City Hall in September, and will serve until 2015.
We hear that there is going to be a new company coming to Peñasco from down south, going to set up business at our international airport and opening up job opportunities . Good news for Rocky Point!
We also hear that the City of Puerto Peñasco will soon have internet access available on the entire Malecón (the road in front of the Sea in Old Port). This will be courtesy of the City in an agreement with Sonoran Digital and TelMex (our local phone company). Soooo… m a y b e you will be able to sit @ Mare Blu Bistro, or Thunder at the Beach, at La Cita or Blue Marlin, or even up at the Lighthouse, or La Casa del Capitan…drag out your laptop, and pretend that you are at WORK.

Sonoran Resorts and the City of Puerto Peñasco were very pleased to present a check for $5,000.00usd to D.I.F. Charity. The huge donation came from their very successful 1st Annual Las Vegas Charity Night, which was held in July at a Sonoran Resort beachfront restaurant local. Watch for us to announce the date for the next event, as soon as Jim Rindquist from Sonoran Resorts lets us know.