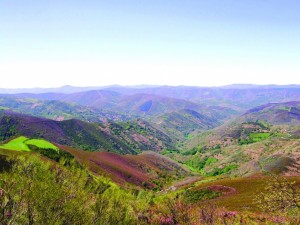 Spain did not have much success expanding its borders past the Rio Bravo, today known as the Rio Grande. For the most part the area north of the River was inhabited by hostile Indians and the terrain was vast and desolate; quite impossible to control without a huge army. However, some pioneers seeking new land and social freedom ventured into the territories north of Mexico City, these settlers were known as the Norteños.

The open plains of Sonora were suited to cattle and grazing. To encourage the migration, the Crown, through the Viceroys, issued thousands of land grants to the Castas, the mixed blooded people, as early as 1670. Mestizo families became Rancheros. With them they brought thousands of heads of livestock. By 1750 there were permanent settlements along and south of the Rio Bravo.

In New Spain a person was identified by race and the color of their skin. This distinction even extended to the taxes they had to pay, the upper classes paid less tax than the hard working lower classes. The Castas living in Mexico City were severely constrained by laws inhibiting them from rising above their life of servitude to the white Spaniards. Opportunities of advancement for the Castas were in these northern territories. While the Norteño was herding cattle he was not subject to the restrictive mandates. He owned a horse, carried arms and knife and wore European dress; privileges that were denied to them in New Spain. These Indio mixed people not only dressed like European Spaniards but spoke Spanish, no longer their native Indian dialects. They were treated, not by their color, but as individuals. To the Indians, like the Apache and Yaqui, they were considered “white” and were subject to being robbed, tortured and killed as any pure blooded Spaniard.

They were on their own out in the wilderness, they were skilled horsemen, and they could be men who took pride in their work; a life they could never attain in the haciendas. Slowly the races melded together. They were neither Indian nor Spanish; they were no longer being identified by their Castas’ labels. They were developing their own identity; they were evolving into the “Mexican.”

Ranchers were called Charros and Vaqueros; this was the beginning of the Cowboy era. These emerging Mexicans adopted their own style of clothing, economics and social values. The name, Vaquero, comes from the Arabic word relating to cow and in Spanish cow is vaca. Buckaroo, is a word we use today to describe a cowboy, possibly came as an English version of vaquero.

Charro refers to the traditional horseman from the central-western regions of Mexico. Vaqueros usually owned a ranch and many head of cattle. Vaqueros and Charros had 2 styles of dress. Charros wore colorful clothing. The Vaquero wore garments we associate with the Mariachis of today; the other, more like what we think of as working-cowboy attire.

The most familiar item of clothing associated with the Vaquero and Charro is the wide brimmed pointy crowned sombrero or hat. It’s practical; it protects the head and eyes from the hot sun. The bandana or kerchief is also used to protect the cowboy from the elements. The jacket of the Vaquero is short and usually wrapped around the waist is a sash. The Charro usually wore a sarape, also known as a pancho, which served as protection from cold and rain and was used as a blanket. It was also used in the roundup by waiving it in the air to help move the cattle. They wore leggings as a protective covering from cactus and bushes, similar to chaps and it may have also covered the horse. The word chaps comes from the Spanish word chaparejos. Footwear could be any shoe or boot or none at all. Spurs, espuelas in Spanish, were worn either around the heel of the shoe or ankle of a bare foot. They were usually made of heavy iron. One of the TV shows from the 50’s was the “Cisco Kid” and his side kick, Pancho, their costume was the classic Hollywood version of the apparel worn by Vaqueros and Charros.