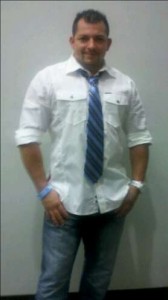 Sonora, Mexico is home of some of the best thrown parties in the world, promoted by John Monteiro, who most of you know as “Crazy John ShotCaller”. Crazy John Productions has promoted some of the biggest & hottest parties in Rocky Point, putting Puerto Peñasco on the radar of many global travelers. ShotCaller has appeared in music videos, pictures and enjoys the limelight Sonora has to offer. He is very proud to represent the people of Rocky Point and enjoys making everyone smile and have a great time.

John was born in Portugal and lived there until the age of five. His Family moved to New Jersey/Connecticut. Growing up, John enjoyed hanging out with his cousins and listening to music. He took acting in school and had several roles in plays, he also learned to play the drums. John started promoting at the age of 15, when he was asked to pass out flyers which promoted clubs in NYC, New Haven, CT, New Jersey, and Massachusetts. John did such a good job marketing the events that Michael Bonis took him under his wing and taught him the ways of the industry. This allowed John to interface with other top promoters such as John Estrada, Louie Ramos who is an icon in NYC, Marc Anthony, and Danny P. from “Backyard Production”. John worked and learned how to promote events from these people, before beginning to promote his own parties with local DJs in CT, such as MC Battle. The key was to always bring in the best singers, rappers and comic performers. Since then, John has been involved in productions in Las Vegas, New York City, New Jersey, Miami, California, Arizona, Connecticut, Mexicali, Cabo San Lucas, Puerto Vallarta, Cancun, Panama, Dominican Republic, Acapulco, Brazil, and Portugal. Meeting DJ’s has always been some of his most memorable moments. In 1998 John says he went to Cancun for the first time and met DJ Skribbles. John says that they partied the night away and to this day are great friends. John also says he is friends with DJ Kid Capri, Funkmaster Flex, Tosha McKia, Angie Martinez, Fat Man Scroop, Coco Chanelle, DJ Chance, DJJ-ROC, DJ Cencero, DJ AB, DJ Tono, and DJ JT, among others. John loves seeing people having a great time in the clubs. He looks forward to meeting new people, making new friends and making sure everyone has an epic time at the events.
Growing up, John had two family mentors in his life. He says,“My best friend, Papa, taught me to enjoy all types of music, he was Puerto Rican so that’s how I picked up Spanish by going out to all the Latin clubs, talking to Latin people and listening to Spanish music. Secondly, my stepfather, taught me to be respectful, how to live life, showed me the swag style of dress and gave me the traditional Italian family upbringing, he was a very old fashioned Italian”.
John took a break from promoting for six years, he says he wanted a change; a family, and a new chapter in his life. He worked as an electrical lineman during this period, but he always missed the promoting days. In 2010 John’s life changed again. He became single again and decided to get back into what he had always had a passion for. Crazy John was back again! As for the name “ShotCaller”, he was nick-named that for always being the one calling the shots at parties. That was when he started Crazy John Productions, and began promoting events in Scottsdale, Gilbert, and Phoenix AZ.
In 2011 John was asked if he would be interested in representing a tequila company out of Rocky Point named Tequila Peñasco, for the USA and Mexico. Since John had the ability to promote events at all the top spots, it was a perfect fit. John began pumping events such as Spring Break 2011, hosting: DJ Slippe, DJ Looney, DJ Louie Boy, Young KeyKey DJ Emboyz, DJ Jon Amoral, 104.7 KISS FM, Aaron Taylor, and MTV DJ Skribble from the USA and Jesus “DJ Ruy” Sanchez (who is one of Mexico’s best) along with DJ Oscar Palak, DJ Rafa Rodriguez and DJ Rich Fernandez. John has created a working alliance with Silvester Brow, owner of District DJ’s. John has also helped Steve McCarthy and the All Stars promote the Peñasco Pooloza Party. From events like these, new local resident DJ’s started a pop life following on Facebook, Twitter, and in the streets of Peñasco, increasing the demand at events for DJ Slippe and DJ Looney.
As a host/promoter in Peñasco, John has formed friendships with Chango Bar, Icebox, Elixir Lounge’s, Party District, Silvester Brown, Ice House and Peñasco del Sol, Party Rockin Crew, Sonoran Sea, Sonoran Sky, Manny’s Beach House, Pink Cadillac, Baja Cantina, Playa Bonita, Las Palomas, Las Palmas, Thunder on the Beach, Wrecked at the Reef, JJ’s Cantina, Home of the Brave Concerts, Boo Bar and the Mayan.

Just recently, Models and Dreams Company & Entertainment LLC (MADC Ent.) announced its acquisition of John’s company, Crazy John Production LLC. John feels that this acquisition is beneficial because it provides MADC another very recognized presence in Mexico. MADC will continue to support the nightlife markets in Rocky Point and help to grow the economy. John said, “I will enjoy wherever this huge opportunity leads us. We can see ourselves doing concerts, party ventures, and events with the companies in Mexico. Our company slogan is, “No Fun Fishing Alone”. Being part of MADC Entertainment, we are actively involving our company in fundraisers for organizations in Peñasco. We will be also supporting the Los Rolling Rockies, a wheelchair basketball team in Puerto Peñasco. We held a fundraiser calledSponsor A Ball to buy them equipment that they desperately need, and we delivered the equipment to them on Friday, July 6th at the Rocky Point Municipal Gym. MADC Entertainment will also be donating sports equipment to Youth Sports Foundation of Puerto Peñasco to benefit their athletic program for the kids”. DJ Slippeand DJ Looney stated that would also like to personally make a donation to the program, and donated regulation sports bottles for the kids of Youth Sports Foundation of Puerto Peñasco and Los Rolling Rockies.