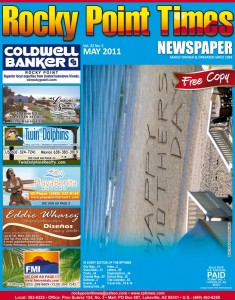 Goats, horses, cows, pot holes, tire treads? What do they all have in common? They are all a potential threat to your safety while driving on Hwy 8, which is the road from Sonoyta to Rocky Point. It is easy to become complacent on Hwy 8, particularly when the traffic is light, but you should be aware that these animals do roam the countryside and on occasion find their way onto the road. I have a good friend who is a long time resident of Rocky Point and will remain anonymous, who was driving along aimlessly and lost his side view mirror to the hind end of a horse. He was lucky it wasn’t a worse case scenario, as it could have been a bad accident.  I have said many times that Mexico Hwy 8 is wider and safer than Arizona Hwy 85 is thru the Organ Pipe National Monument. That still holds true but recently I’ve noticed that there is about a five mile stretch of road that needs to have some pretty big potholes repaired. Oncoming traffic has a tendency to swerve to avoid them, which can be a little unnerving. The bottom line is for you to try not to drive at night and always stay vigiliant.

Speaking about highways, I have also written many times about what I consider one of the most dangerous intersections in Rocky Point and that is where the Hwy 3 to (Laguna del Mar) San Luis meets Hwy 8, at the “Turnaround”.  I have seen more accidents occur there than in all of Rocky Point. In an attempt to solve the problem, the City has reduced the speed limit to 35km as you drive on Hwy 3 approaching Hwy8, and they have installed metal stops and a concrete speed bump, as well as a flashing red light. This is a step in the right direction.

One of our Rocky Point subscribers just sent us a nice note saying that the Coastal hwy (Hwy 3) is faster and easier to drive from Yuma to Rocky Point than for him to drive to San Felipe, Baja, and the road is in much better condition. Therefore the drive for our California tourists is much shorter than it was, that is why we are seeing so many California plates on the cars driving past our ‘Ranchito”.

Speaking about roads our contributing writer Johnny Calamari explored the part of the New Coastal Highway going from Rocky Point to Desemboque, and on to San Carlos. (Be sure and check out his article in this issueon).

Also, as long as we’re on the ‘road talk’, here is another reminder about watching your speed as you approach Sonoyta heading north from Rocky Point. The speed limit drops to 40km per hour, and more often than not there is a policeman with a radar gun ahead of you, you can’t see him until you crest the hill and, whoops! Too late.

Another thing which we have been asked to remind our readers is,if you want to travel beyond the free zone, you cannot get a visa at the border like we did for years. They are available at the check point in San Emeterio, south of Sonoyta on Hwy 2.

For what its worth, I was talking to my dentist, Dr. Grijalva about new dental technology versus some of the older ways of practicing dentistry. With his new x-ray equipment as an example, you receive ninety percent less radiation and it is much more effective for checking bone density, curvature, height and width of jaw bones, particularly useful when doing implants. Speaking of implants, I asked Dr. Grijalva how implants have affected his practice compared to when he was doing full dentures. He said at one time he could see about twenty patients per month for dentures, now he sees maybe one per month. He also said there is a relatively new procedure for people with dentures, he asked me if I was familiar with western shirts? I said, what? He said, “It like their buttons”, he said that now you can have some sort of implant and denture wearers don’t have to use an adhesive, the dentures just snap in place”. We got off the subject of dentistry, during our talk, and were discussing penal systems here in Mexico and the United States, and what a huge monetary cost it is to maintain them.  He finally laughed and said maybe we should go back to using the “Pancho Villa Jail”. I told him that I had never heard or read anything about that. He said that as the story goes, his jail was built on a very small plot of land and could only hold one person, who had to remain standing, as there was no room to sit. When the next accused was convicted, they took the first one out to make room. I asked what happened to the first guy, “He got shot?” Dr.’s reply “I don’t know”. I don’t think too many laws were violated, if the tale were indeed true.

I am often asked about the economy here in Rocky Point, and my reply is that like most of the world we are struggling just as everyone else. I firmly believe, however, that it is less expensive to survive on a fixed income here in Rocky Point. For example, We went to one of our smaller markets and bought the following, about 5lbs of cat food (croquetas), one large white onion (cebolla), two bunches of green onions (mazos), one head of lettuce (lechuga), four potatoes (papas morenas), 3 avocados (aguacates), two tomatoes (tomates), three oranges (naranjas), a half-size loaf of bread (pan chico), and two squash (calabacitas) , with a total cost of one hundred and fifteen pesos. The peso, as of this writing, is about eleven to one. I know every time we go to the store in Ajo, its thirty dollars and up to get out the door. Just saying.

The other day a gentleman, by the name of John C. Bynum, came into the RPTimes office and said that he is a long time resident of Cholla Bay, he asked me if I thought there were any VUMS here in Rocky Point? I told him I wasn’t familiar with the word VUM. He explained that it is not a word but the name of an organization and V.U.M. stands for veterans of underage military service, which was founded in 2001 by Allen C. Stover and at one point had several thousand members. All US branches of military service are eligible to join VUMS, if you meet this single requirement: You must have enlisted when under age 17 for men, and 20 for women of WWII. U.S. Merchant Marines of WWII must have been under age 16 to qualify for VUMS. John left me with a few of VUMS monthly publications and there are some interesting stories about men and women who are members of VUM, along with their histories. It is a nationwide organization which is on the look out for new members. For more info contact George Rogers at (770) 943-3813 Fax (770) 222-4833 or email georgerogers@bellsouth.net.

It is coming close to that time of the year when you may want to have the phone number in your roladex of Mikki and Jaun. They  are the owers of “The Energy Tec” A/C Heat & Water Heaters, tankless and solar.  They are a full service AC/heat company with preventative maintenance plans.  Their tecs are certified, with years of experience. U.S. number (480) 409-4429,  Mexico (044-638) 109-6809 email energytecmx@gmail.com.

In Tom’s April Editorial, we were named incorrectly as being with Tom and Alicia at Mi Familia Restaurant Opening Night. Wish we had been there, but the couple who were there are John y Janet Zanotti also from Puerta Privada.  Thanks for correcting this,

Sandy says, sorry Janet, I hate it when I ASSUME something like that. When Tom mentioned he and Alicia sat with “John and Janet” from Puerta Privada at the opening dinner…of course I named them QUIGLEY. I apologize, but I am sure it won’t be the last time I do something like that while editing.

While we were delivering the paper to the RV Park at the Reef, we met a group of 18 RV’ers  from San Diego. In conversation one of the women said that basically some of her friends almost begged her not to come to Rocky Point for fear of her life. She ignored them and said that she and the group had a fantastic vacation and were looking forward to return next year, if not sooner. It just amazes me how the media paints all of Mexico with one brush. If there is an earthquake in California or a serial killer loose 3,000 miles away in New York, they don’t put out travel bans etc., yet Rocky Point is blamed for any act of violence that takes place maybe a thousand miles distant. Could it be they want to keep tourist dollars closer to home?  Maybe in my editorials I should warn the Mexican businessmen who shop in Phoenix to watch the news to see what area is cordoned off because of a fatal shooting,almost on a daily basis.